"Are you telling me she's going to evict someone from their own body? That's rude."
—Piper talking to Leo about Jeric and Isis

Y Tu Mummy También is the 10th episode of the fifth season and the 98th overall episode of Charmed.

A lovelorn demon mummifies Phoebe in his quest to find the perfect body to hold the spirit of his dead lover.

A Demon known not only for his witch killing, but also for his rituals of mummification. His evil dates as far back as ancient Egypt and in the past few decades he has surfaced in the Middle East, Cairo, Istanbul and Tripoli. He can be identified by the sand that is left behind in the wake of his dematerialization.

Jeric has cast the Spell to mummify Sandra.

To See What Someone Has Been Scrying For

Paige casts this spell to let the Scrying Crystal show what Sandra had been Scrying for. It turned out that she scried for Phoebe. When they found out Jeric was after Phoebe, they orbed to Phoebe, but they were too late: Jeric was just Teleporting away with Phoebe.

Scrying secrets, come to me
drop again so I might see.

Isis' Soul is transferred from Phoebe's to Paige's body.

To Drive a Soul out of a Body

After she possessed Phoebe's body, Isis cast this spell. She hoped it would drive Phoebe's soul out of her body, but the spell didn't work. Phoebe's body then started to burn up and required Jeric to transfer Isis' Soul to another body and mummify Phoebe's.

Together no more through time,
expel her soul, leave only mine.

To Drive Isis' Soul out of a Body

Piper cast this spell to drive Isis' Spirit out of Paige's body. However, Jeric thought it drove Paige's Soul out and thought he finally was united with his love. Paige however hit him and rushed over to Phoebe and Piper and cast the Spell to demummify Phoebe.

Two warring souls now burn inside
where only one can reside.
I call upon the Power of Three,
to save her body and set her (Paige) free.

After Piper drove Isis' Spirit out of Paige's body, Paige casts this spell to demummify Phoebe. At first, Isis was the only one to know this spell, but because Isis was in her body, Paige also knew this spell. After Phoebe was demummified, Piper blew up Jeric, saying he and Isis now at least were together. 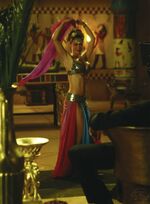 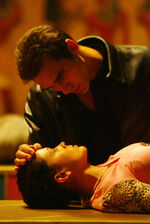 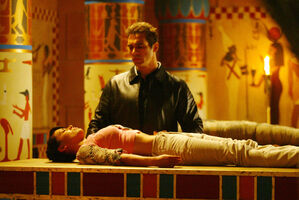 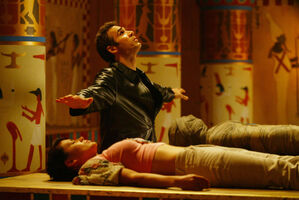 Jeric: Who are you?
Cole: (offering a hand shake) Oh, Cole Turner, I used to be the Source Of All Evil, you're Jeric right?

(Piper expells Isis from Paige to the afterlife and blows up Jeric)
Piper: Well at least they're together now!

(Piper and Cole are fighting)
Leo: Hey! What are you doing? You're both invincible! This is pointless.

(Piper, Phoebe, and Paige are talking in the living room)
Phoebe: That's my niece in that belly!
Paige: She's my niece too.
Phoebe: Hi niece! It's your favorite aunt Phoebe!

Retrieved from "https://charmed.fandom.com/wiki/Y_Tu_Mummy_Tambien?oldid=441608"
Community content is available under CC-BY-SA unless otherwise noted.