4398009
Wicca Envy is the 10th episode of the first season and the 10th overall episode of Charmed.

Prue's devious boss and secret warlock Rex frames Prue for stealing a priceless tiara and puts her in jail. The sisters plot a jailbreak to catch the sly Rex in action.

To Relinquish Our Powers

From whence they came,
return them now;
vanish the words,
vanish our powers.
to be chanted thrice.

She's so High by Tal Bachman (after opening titles) 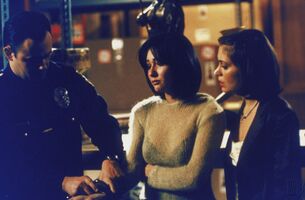 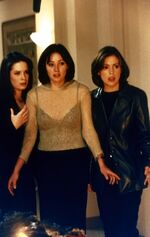 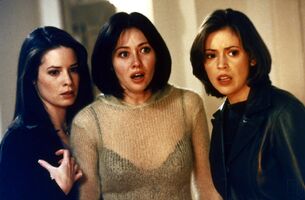 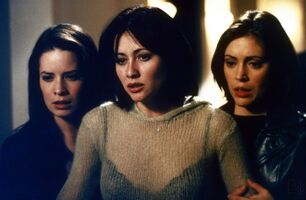 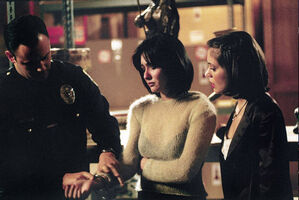 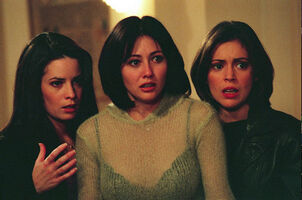 (Prue and Phoebe hear Piper laughing and then Piper and Leo run into the foyer. Piper sees them.)
Piper: Oh my God, Prue. (She freezes Leo, trips over his leg and slides across the floor and stops at Prue and Phoebe's feet. They help her up.)
Piper: I'm so embarrassed.
Phoebe: Of course, she may have other things on her mind like having her way with the handyman.

Phoebe: Whoa, whoa, whoa. You, Leo, last night, dish.
Piper: Um, well, it was nice. It was... well, it was wonderful. We just had a few problems.
Phoebe: Problems?
Prue: What problems?
Piper: Well, it's been a while since, you know, I-I was a little nervous, and I kinda kept freezing him.
Prue: Piper, you didn't?
Piper: I didn't mean to... the first time.
Phoebe: (making little noises) Ohh!
Prue: Okay, so, um, at what point exactly in the process exactly did you freeze him? (Piper doesn't say a word.)
Phoebe: Hello?
Piper: I gotta go. (She walks around them and heads for the door.)

Phoebe: I mean, between you and Leo, and Prue, the new Hot Wicca Woman, and me, soon to be employed, things are looking up.
Piper: Don't say that! The moment someone says that, everything always goes south.
Phoebe: Unless you freeze him. (Piper grabs her coat.) Oh, I couldn't help it. It was so good.
Prue: Okay, okay, come on. If you're gonna borrow the car, let's go.
(Leo comes down the stairs.)
Leo: Good morning.
Phoebe: Yeah, we heard.
(Piper laughs nervously. Prue and Phoebe grabs their coats.)
Prue: Ah, bye.
Phoebe: Yeah, have a magical day.

Leo: The front door was open. I hope it's all right. I left my tool box.
Piper: That's funny. I don't remember that being there last night.
Leo: Yeah, well, you know what Freud always said about leaving things.
Piper: That you secretly wanted to come back for it.
Leo: Guilty.
Prue: Oh, don't use that word.
Phoebe: Uh, it's a long story. Never mind.

Retrieved from "https://charmed.fandom.com/wiki/Wicca_Envy?oldid=424763"
Community content is available under CC-BY-SA unless otherwise noted.