"That is so great! I am now Paige Matthews, Whitelighter-Witch. I'm a hyphenate."
—Paige after The Elders assign her her first charge[src]

Whitelighter-Witches are witches born with Whitelighter blood and genes, allowing them to manifest a variety of Whitelighter powers and calling.

The relationship between a witch and a whitelighter was originally forbidden by the Elders. For this reason, only a small number of Whitelighter-Witches exist, most of which are born within the Warren line of witches.

The first of this breed seen in the series was Paige Matthews, the secret daughter of Patty Halliwell and Sam Wilder. To keep Paige's birth secret from the Elders, the couple brought her to a church, where a nun named Sister Agnes gave her to Mr. and Mrs. Matthews to be raised.

It was later revealed that one year before the birth of Paige, a Whitelighter-Witch was born in the Marks Line of Witches named Simon Marks. However, the details around his birth were never explained.

The third was Paige's nephew Wyatt Halliwell, who was born from the union of Piper Halliwell and her Whitelighter Leo Wyatt. He was ultimately one of the most powerful beings in existence due to being the Twice-Blessed Child. The two had a second son about a year afterward; Chris, who was also half-Whitelighter but not as powerful. Years later, Piper and Leo had a third child together, Melinda Halliwell, who was made into a Whitelighter-Witch by the Elders in an attempt to create more Twice-Blessed children. Paige's twin daughters, Tamora and Kat, are also part Whitelighter, however, their Wiccan active powers did not mix with their Whitelighter heritage.

Piper and Leo will ultimately have a grandson named Matthew Halliwell, who was also part-Whitelighter, as seen in a flash forward. Which of their children is his parent is still unknown.

Main article: Telekinetic Orbing
Telekinetic Orbing is the ability to transport objects with the power of the mind through the use of orbs. This power is a hybrid form of Telekinesis, possessed by Whitelighter-Witches due to their Whitelighter side altering their power. Beings such as Elders have also displayed this power.

Main article: Orb Shield
Orb Shield is the ability to create a sphere or barrier in order to defend oneself or others. It is a form of Force Field which appears as translucent blue energy. This power is a highly focused advancement of telekinetic orbing, developed by Wyatt Halliwell and Paige Matthews. 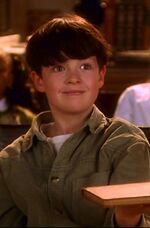