Whispers from the Past

Season 2
Whispers from the Past is the 4th book of the Charmed novels.

The novel is set between "The Devil's Music" and "Awakened", as Piper mentions a 'Saturday dinner rush' at P3 in chapter 4, and Prue says that she still works at Buckland's in chapter 8. In chapter 3, Phoebe refers to coming from the 21st century, meaning it is the year 2000 already.

A shard of mirror for a broken reflection
A pocket watch with a cracked face
A cache of herbs to burn for protection
All will send me to another time and place.

Phoebe Halliwell is having a very bad day: A demon has pulled her centuries into the past. She has no way to tell her sisters she's alive, no way to get back to her own time—and the demon is trying to kill her.

Back in the present, Prue & Piper are devastated at losing their sister. But that isn't their only problem. Something is wrong with them, too. Somehow, they're turning… evil.

But why? And how can they stop it—without the Power of Three?

Contents in the Evil Book of Shadows

This page is illustrated with the drawing of a lacerated deer.

Make an image of thy foe,
Slash it as I slashed the roe.
Then bury it beneath full moon
In the grave of one hanged too soon.

Falcroft is very powerful, very evil.
He constantly tries to wreak havoc in the past, present, and future.

Phoebe's Message to Prue and Piper

This is a (frantic) message to Piper and Prue:
Help! It's me, Phoebe, and I'm alive and kicking in Salem, Massachusetts.
Yes, Salem, land of the witch-hunt. I've been told the year is 1676, and I'm staying with this chick named Prudence, who is actually our ancestor (and, I guess, your namesake, Prue). She's not a lot of help, though, since she's under an evil spell.
The thing is, that warlock who attacked us is actually a time demon (whatever that means) and he sucked me through a portal—some kind of time rift or something—and here I am.
The demon is here, too, planting seeds of evil to ruin our family. Oh, yeah—he's got a warlock helping him. Anyway, here I am up a river of evil without a good witch in sight—and I'm drowning! HELP!

Love you guys! And I miss you!
Phoebe

For this spell, something of the Lost One's father is needed, a lock of her hair and a piece of clothing dear to her.

A trace of paternity,
Clothing so dear,
A lock of hair
To track far and near.
Find (?) [our Phoebe],
Point the way.
Track her spirit,
Find her today.

Spell for Banishing the Most Evil of Demons

For this spell, the following ingredients are needed: a thimble, soil from the earth where three roads meet, a pinch of salt, a needle of pine, ground pepper, a tea leaf, a nutmeg kernel, two flat stones, a feather and Queen Anne's lace. The ingredients should be thrown in a fire before the spell is cast.

Friends of light and sister sun,
Winter moon & summer shower,
Send this demon back to darkness,
Banish him, destroy his power.

A Spell to Splinter Enchantment

Day to night,
Night to day,
Break the spell,
Cast it away.

Differences from the Show 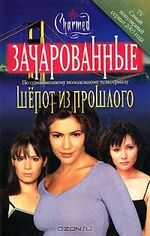 French cover
Add a photo to this gallery
Retrieved from "https://charmed.fandom.com/wiki/Whispers_from_the_Past?oldid=444113"
Community content is available under CC-BY-SA unless otherwise noted.