Tyler Michaels was a foster child with the ability to create fire, adopted by two Demonic Bounty Hunters, Stephen and Annette. Believing him to be a Firestarter, they wanted to deliver him to the demon Ludlow so he could be trained as a bodyguard to the Source of All Evil. After he was saved by the Charmed Ones, Tyler had his powers bound by Piper at the age of eleven.[1]

Tyler's powers were unbound six years later when he was targeted by demons.[2] He began attending Magic School and started dating a male witch named Kareem Scales. When he suddenly gained new powers, it was discovered that Tyler was not a Firestarter, but an Archai instead.

"I'm not going to boarding school. You can't send me away."
— Tyler to his foster parents.[src]

Tyler was born in 1990. At some point during his life, he was adopted by two Demonic Bounty Hunters. During adolescence, Tyler's pyrokinetic powers began to develop. Every time that Tyler was angry, he would set something on fire. When he was eleven, his foster parents found it was time to deliver him to Ludlow, an upper-level demon in charge of a demonic academy. Tyler first thought that his parents were going to send him to boarding school for his bad behavior, and ran away from home.

First encounter with the Charmed Ones

Tyler: "An extremely rare and coveted magical creature. What does coveted mean?"
Piper: "It means highly desirable, wanted."
— Tyler discovers he is wanted.[src]

Tyler ended up at South Bay Social Services. He would not speak to anyone, and ultimately set a garbage bin on fire. Tyler ran out, but was followed by Paige Matthews who took him to her home after seeing his power.

At the manor, Tyler learned that his powers were a gift. He learned to control them with help from Piper and used them to vanquish his foster parents, Stephen and Annette. Tyler felt guilty, as if he did a bad thing, but Piper assured him that he did a very good thing. She showed him the Book of Shadows and both discovered that his foster parents were actually Demonic Bounty Hunters. Tyler wondered if the Book would have an entry on his species. He read the Firestarter entry from the Book and discovered that he was coveted, meaning wanted.

Ludlow and the Academy

"All the pain is over. Soon you will serve the Source."
— Ludlow preparing Tyler.[src]

Piper and Leo Wyatt went to the Academy to vanquish Ludlow. Tyler jumped the orb and went with them. As they entered Ludlow's office, the demon appeared in a bolt of lightning. After two failed attempts by Piper to vanquish Ludlow subtlety, Tyler had to show Ludlow his power and put him on fire in an attempt to vanquish him. However, Ludlow was immune to Tyler's powers and immediately froze him, before sending Piper and Leo outside.

Piper tried to get back in to save Tyler but the gates of the academy wouldn't let her. Leo went back to the manor to get her sisters. In a failed attempt to open the gates with a spell, Piper got pissed and blew the gate open. The sisters and Leo entered Ludlow's office where the Charmed Ones immediately vanquished Ludlow with a haiku, written by Paige. Leo then healed Tyler.

"Alright, here you go. It'll bind your powers, it won't strip them but it'll bind them."
— Piper to Tyler as she hands him the potion.[src]

Back at the Manor, Tyler decided that he wanted his powers bound. Piper made a Binding Potion and bound his powers. Tyler tried to set something on fire, but nothing happened. Tyler was very content and ran to the living room to play games, like any normal kid. Paige then presumably took him back to social services, where Tyler would eventually be placed with the Michaels'.

Second encounter with the Charmed Ones

About six years later, Tyler was once again attacked by demons. The sudden attack and fear unbound his powers and Tyler began to put several things on fire yet again. Piper and Paige came to his aid and vanquished the demons. It seemed that they wanted Tyler's blood, as one of the demons left behind an injection needle. His blood, as well as the blood of other innocents saved by the Charmed Ones, was needed for a ritual that brings back the Source of All Evil. Piper and Paige took him to the Manor where he and other innocents were taken care of by the sisters. While at the manor, he was reading a comic book.

A few weeks later, Tyler had almost become a student at Magic School. He and the other students were brought to safety when the Source attacked the school. Tyler wanted to stay, saying that Harry Potter let the other students fight as well during the battle of Hogwarts.

A few months later, when Paige's home caught fire, the sisters suspected the connection to Tyler and questioned him about it. He directed them to Knox Academy, another institution for magic. After the switch of magic, he became a powerless mortal, but still demanded to be part of the Charmed Ones' team to defeat the one responsible. He helped fight the Automatons outside of the All while the sisters confronted Rennek.

At some point in 2010, Tyler began dating a male witch named Kareem. After a date where they discussed their futures, Tyler dreamt of being in Paris with him. When he woke up, there was a flaming portal above him. When Tyler went outside, he saw the entire street was filled with these strange portals. In a panic, he reached out to Paige.

Paige and Tyler checked the Book of Shadows and found an entry of Archai, revealing that Tyler was not a Firestarter as they previously believed.[3]

In the months to come, Tyler learned to control his powers and opened to portal to the Demonic Wasteland to help Coop Halliwell and Henry Mitchell recover Benjamin Turner's soul.[4] Sometime after this, he began to become possessed by multiple evils who were defeated by the Charmed Ones, including Shax, Abraxas, Barbas, Jeremy Burns, Zankou, Javna and Tuatha. The sisters eventually find out that he was splashed with the Old One Heremus's blood, and subsequently became a conduit that served as a portal for vanquished evils to return to life. Prue then astral projected into his body and managed to "free" Tyler from the demon.[5][6][7][8][9]

Battling the Old Ones

It was revealed by Patience that his Archai power was awakened by an unsuspecting Prue, who used him as a conduit to bring about the advent to revive the Old Ones. Prue abducted Tyler to Salem where the ceremony took place, where Dominus possessed him to activate his power.[10]

"The power is linked to their emotions. It first manifests in adolescence with the onset of puberty."
— The Book of Shadows on the powers of a Firestarter.[src]

Tyler gets angry and

sets his bed on fire

by what he did 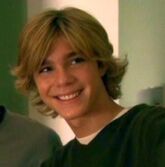 The look on which Tyler's appearance was based

Tyler in his comic form

Tyler Michaels has appeared in a total of 1 episode and 19 comic issues throughout the course of the series.