4398011
The Wendigo is the 12th episode of the first season and the 12th overall episode of Charmed.

When a hideous supernatural creature attacks Piper, she begins to make a strange transformation with similar traits to her attacker. Prue and Phoebe must save her by vanquishing the beast. But at night in the woods, how will they know for sure if it's the creature, or if it's Piper?

The Wendigo is a non-dead creature that roams the earth destroying the good-hearted and those in love. His fate is to wander the Earth feasting on human hearts. The first Wendigo was a mortal who was betrayed by his sweetheart. In revenge for the treachery, he slew his love and ate her heart. Rather than savor the warmth of revenge, his heart was in turn, turned to ice. During daylight hours and the phases of the moon, the Wendigo looks as you or I. Beware the Wendigo on the three days of the full moon when his strength and appetite are greatest. Beware being attacked and injured. He duplicates himself by slashing, but not killing his prey.

Unbecoming the Wendigo tells witches how someone can unbecome a Wendigo. Prue found the entry through the Desiderata entry.

Destroy the Wendigo by melting
his heart of ice, fire is the key
Show no mercy, he will show
none to you. If a person has
been injured but not slain by the
Wendigo, said person will only
be made whole by the complete
destruction of the Wendigo. 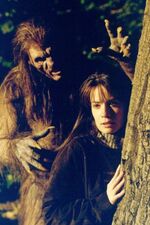 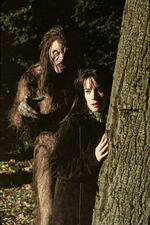 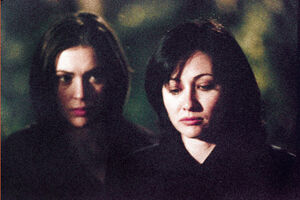 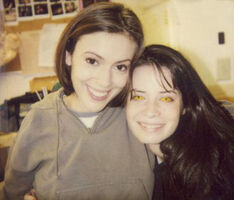 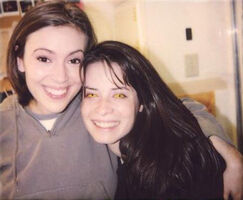 Andy: Yeah, I've sent for the Coroner's reports.
Agent Fallon : Why? I think it's pretty obvious this case is out of your jurisdiction, Inspector. On the bright side, you don't want it.
Andy: Why is that?
Agent Fallon: This witness collaborates with every other statement. According to their descriptions, this—not animal or human. You didn't blink, I was expecting a response.
Andy: Just tell me what I'm looking for.
Agent Fallon: You believe them? That it's not human?
Andy: Let's just say that recent experiences have taught me to keep an open mind.

Prue: Oh, um, can you get up?
Piper: Back off! What, you think I can't walk now?
Phoebe: Honey, we're just trying to help you.
Piper: Help me? You can't even hold a job.
Prue: Okay, now wait a minute, Piper.
Piper: Oh, save it. Do you always have to be in charge? I'm sorry. What's happening to me?

Prue: Do we have any chains?
Phoebe: I actually do think I have something.
Prue: Okay. Are you back?
Piper: I don't want this to happen to me, Prue. Kill Ashley. This is me talking.
(Phoebe enters. She holds up a pair of handcuffs.)
Phoebe: Here.
Prue: Where did you get those? (Nods head from side to side.) Never mind.

Piper: And Andy, by the way, what did you tell him about why we were all there.
Prue: I told him the truth.
Phoebe: Get out.
Prue: I did. I said what he saw happened was true, that Agent Fallon really was the Wendigo and that had we not vanquished her, that both he and Piper would've been killed. I couldn't think of anything else to say.
Piper: Well, what did he say?
Prue: Not much. He was either too stunned to speak or he actually believed me on some level. This was as close that we've ever come to having an honest conversation.
Phoebe: So maybe Andy's more open to you being a witch than you think.