The Wedding from Hell

4398004
The Wedding From Hell is the 6th episode of the first season and the 6th overall episode of Charmed.

An evil-bride-to-be, interested only in creating more demonic offspring, battles the Halliwell sisters during her demonic wedding party but is thwarted by Prue's investigation of a mysterious knife.

Hecate, Queen of the Underworld, takes human form every two hundred years, coming to earth to marry a mortal and give birth to the demon child (See Photo). To do this, Hecate must catch an innocent to be her groom, put him under a spell, and marry him in a sanctified wedding. In this way her child will grow up looking normal, but possessing a demon soul. Those reputed to be Hecate's children are significant throughout history. See: Attila the Hun,Genghis Khan and Ivan the Terrible.

To Create a Storm

This spell was cast by the demon Hecate during her wedding to Elliot Spencer. It called upon Perses and Asteria and conjured a huge storm. In Greek mythology, Asteria and Perses are the parents of the Goddess Hecate.

By Asteria and Perses,
Open, sky, and do your worst! 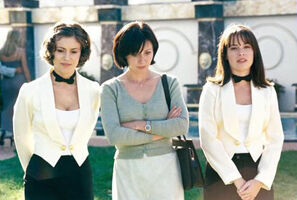 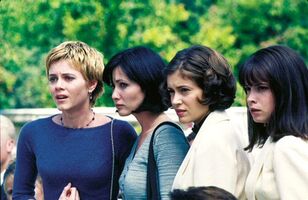 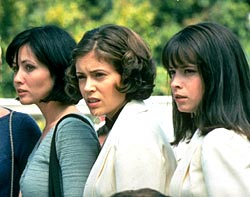 (Piper throws the pregnancy test box in the bin and opens the door.)
Piper: What?
Phoebe: Am I in for a cold shower? Yes or no?
Piper: At certain times in our life, a cold shower is probably a good thing.
Phoebe: Not three mornings in a row, it's not. (Piper leaves and Phoebe walks in the bathroom. She starts brushing her teeth and notices the box in the bin. She picks it up and has a premonition of a demon being born.)

(Rex walks in.)
Rex : Prue, your, um, sister's here to see you. She's waiting in your office.
Prue: Which sister?
Rex : The one who upon seeing your office, said "Damn, I should go back to college."
Prue: Phoebe.

(Prue's squatting on the floor holding the male fertility icon. She's peeling a sticky tag off of its... Andy walks in and sees what she's doing.)
Andy: I'll come back when you're alone. (Prue puts the icon in its box.)
Prue: Uh, no. (She stands up.) It's, it's okay, I'm finished. Somebody just put a sticky inventory tag on his... uh... on the, uh...
Andy: Artifact?

Piper: Beware Hecate. That's what the Father Trask said. Then he tried to kill Jade.
Prue: She's a demon. She comes to earth every two hundred years. She has to find an innocent, put him under her spell, and marry him in a sanctified wedding.
Phoebe: That doesn't sound any different than most of the single women in this city.

Prue: Have you ever seen that television show where there's the woman who's an angel and she helps strangers every week?
Allison : I love that show.
Prue: Don't get too excited, I'm nothing like that. But, uh, my sisters and I, we have special gifts.
Allison : Gifts? What kind of gifts?
Prue: Ones you can't return. Let's just say we come from a very interesting family tree. Look, if you can, if you'll trust me, we can bring you and Elliot together. (Allison nods.)

(Outside the Spencer's house. Elliot and Allison are together hugging and kissing. Prue, Piper and Phoebe are near by.)
Prue: We did that.
Phoebe: And they'll live happily ever after.
Piper: I wonder if we will.
Prue: Of course, we will. Why shouldn't we?
Piper: That's easy for you to say. You'll never greet your husband at the door with: "Honey, I think I froze the kids."
Prue: No, I've just accidentally moved them to another zip code.
Phoebe: But I will see them, find them, and bring them back safely. If I can ever learn to control my powers.
Piper: If any of us can.

Jade: Why you little witch!
Piper: (is offended) Hey!
Jade: By Asteria and Perses, open sky and do your worst!

Retrieved from "https://charmed.fandom.com/wiki/The_Wedding_from_Hell?oldid=424749"
Community content is available under CC-BY-SA unless otherwise noted.