The Warren Line of Witches

The Power of Three

"Three hundred years and not a male in the bunch."
—Penny Halliwell.[src]

The Warren Line is the lineage of witches to which the Halliwell family belongs. The line started with Melinda Warren, daughter of Charlotte Warren, in the late 17th century. They are the most powerful line of witches in history.

The bond of family is important to all Halliwells, such as Penny Halliwell, the Charmed Ones' grandmother. She had fallen in love with the Necromancer, who offered her the opportunity to be brought back to life so they could live together at the cost of alienating her family and sacrificing generations of magical spirits. Though she appeared tempted, under a truth spell she told him that while she loved him, she loved her family more, then vanquished him.[2]

Starting with Patty Halliwell keeping her last name and giving it to her children, the family has had matrilineal tendencies. Piper Halliwell and Phoebe Halliwell also kept their last names on marriage and passed the name onto their children.

"A Warren. It's a family trait. So are the short tempers, the great cheekbones, the storng wills, and, of course, the powers. All blessings. All signs of where you came from."
—Melinda[src]

The Warren Line of Witches began with Charlotte Warren, a witch practitioner and the mortal Lawrence Cutler. Charlotte was lead by the first witch to Eva and her coven of witches in Colonial Virginia because she was pregnant with a very magical baby.[5] Toward the end of her pregnancy, Charlotte was kidnapped by an evil witch named Ruth Cobb who sought to use the baby's powers for darkness instead of good. On October 31, 1670, Charlotte was rescued by the Charmed Ones, who were sent back in time in order to preserve the destiny of good magic, and delivered Melinda Warren in a protective circle with the help of Piper Halliwell.[6]

Melinda Warren grew up to become a powerful witch and created the Book of Shadows. She possessed three magical powers; telekinesis, molecular immobilization and premonition. After the birth of her daughter Prudence, Melinda had an affair with the warlock Matthew Tate. After he mimicked her powers, he exposed Melinda as a witch during the Salem Witch Trials. Melinda in turn cursed him into a locket for his betrayal. Despite having the power to save herself, Melinda let herself be burned to ensure the safety of her daughter. While at the stake, she prophesied that each of her descendants would grow stronger and stronger, culminating in three sisters who would be the most powerful good witches ever to walk the earth, the Charmed Ones.[7]

Continuation of the Line

Prudence Warren was Melinda's only child. After her mother's trial, Prudence carried the family legacy and continued the bloodline.

Brianna was a powerful witch of the Warren line who lived during the Crimean War. Her power was Advanced Telekinesis, which she used to separate the Lord of War Gabriel Statler from his enchanted Crystal Sword. This defeat disgraced the man and he was quickly defeated.

Beatrice Warren was a witch of the Warren Line. Beatrice only had one leg.

P. Bowen worked as a photographer at the speakeasy while Baxter was the primary runner and caretaker, and Russell acted as a fortune teller and witch-for-hire for those who came to the Manor. (Which foreshadowed their future reincarnations. Prue took a job at 415 Magazine to fulfill her passion for photography, Piper owned the popular club P3, and Phoebe once worked as a hotel lounge psychic to buy Prue a birthday present).

Unfortunately, P. Russell fell in love with a warlock named Anton and was turned evil through his influence. They plotted to kill Bowen and Baxter so that Anton would obtain their powers. To do this, Anton gave Russell a potion that tripled her powers and gave her the ability to throw fire. Anton then shape-shifted into P. Baxter's former lover, who was a past life of Leo Wyatt.

During their attack on the Manor, Russell's cousins strangled her. Baxter and Bowen feared that Anton would be too much for their descendants to handle should he ever reunite with any future life of Russell. With this in mind, they also cursed Russell's soul so she and all her future lives would die on the same day and age. In modern times, Phoebe switches souls with Russell, and during this time, Russell accidentally vanquishes Anton when Prue deflects her fire toward the warlock. The curse created by Bowen and Baxter was broken by Prue and Piper, when Phoebe and Russell returned to their bodies and Phoebe's sisters placed Russell's amulet around her neck to stop the curse from taking effect.

It is shown that P. Bowen was Prue's past-life, P. Baxter was Piper's past-life, and P. Russell was Phoebe's. They became sisters in their current lives, with Russell's pyrokinesis taken from Phoebe as a punishment for her abuse of it as Russell, and Prue and Piper given power advancements for their good deeds in their past lives. P. Baxter's husband, Gordon Johnson (1895-1965), was Dan Gordon's past-life and Penny Halliwell's father, and thus the Charmed Ones's great-grandfather. P. Baxter's unnamed former lover was a past life of Leo Wyatt, Piper's current husband.

Penny Halliwell (1937-1998) was the daughter of P. Baxter and Gordon Johnson, wife of Allen Halliwell (1930-1967), and mother of Patty Halliwell. She was born in a hotel room in Boston. Penny was gifted with telekinesis and had gained such precision with it that, when she believed her granddaughters were being taken by warlocks (who were actually the Charmed Ones from the future), she was able to open the front door while simultaneously sending the trio flying out of the door from the solarium. She was married four times, engaged six, and divorced three times. Penny was also the lover of the Necromancer and was the one who ultimately vanquished him. Penny bound her granddaughters' powers until her death in 1998. Afterwards, she continues to help her granddaughters from beyond, whether as turning pages in The Book of Shadows or physically appearing as a ghost to assist them.

Patty Halliwell (1950-1978) was the mother of Prue, Piper, Phoebe Halliwell and Paige Matthews, ex-wife of Victor Bennett (1949), and former lover of Sam Wilder (1848), her Whitelighter. She was born in 1950. Patty had the power of molecular immobilization. In 1975, Patty made a pact with the warlock Nicholas and blessed his ring, granting him immunity to the Charmed Ones' powers. Soon after, she meets the future selves of three of her daughters and helps them to undo the pact that was made so that they would be able to vanquish Nicholas in their own time. (It appears that she and Penny created the Nicholas Must Die spell after sending them back to the future.) After getting divorced from Victor and getting into a relationship with Sam Wilder, Patty became pregnant with her fourth daughter, Paige, and gave her up to a local church soon after she was born, fearing repecussions of the Elders if they discovered she had a child with her Whitelighter. Soon after, Patty was drowned by a water demon. She occasionally assists her daughters from beyond.

Prue Halliwell (1970-2001; 2009-2010), Piper Halliwell (1973), and Phoebe Halliwell (1975) were raised in the Halliwell manor by their grandmother Penny Halliwell (Grams) who died, leaving the house to the sisters. After the death of their eldest sister, Prue, the sisters were revealed to have another sister, Paige Matthews (1977). She was taken in by Piper and Phoebe to not only be loved but trained as a witch. As time went by, Piper, now the eldest sister, had two sons (Wyatt (2003) and Chris Halliwell (2004) with her husband, who was at the time an Elder, Leo Wyatt (1924-1942;1942). After he fell from grace and became mortal they had another child, Melinda Halliwell (2007). Phoebe, the living middle sister, found love in a Cupid named Coop, whom she soon married. The couple went on to have three daughters (Prudence Johnna (2007), Parker (2009) and Peyton Halliwell (2011)). Phoebe was also once pregnant with a son, while being married to Cole Turner (1885-2003). Paige, the youngest sister, married a mortal named Henry Mitchell. The two have twin daughters, Tamora and Kat (2007) and an adopted son, Henry Mitchell Jr. (2008).

In the distant future there are numerous children who play in the Halliwell manor in the presence of one of their "Grandmama", Piper Halliwell. The various grandchildren are all the children of the children of the Charmed ones, but all remain to be unnamed except for the eldest grandson Matthew Halliwell; his parents are unknown. The youngest granddaughter, Prudence Halliwell is distinctly seen talking to an elderly Piper and being handed down the Book of Shadows by Piper. As her ample amount of siblings and/or cousins enter the house Prudence telekinetically closes the door.

The powerful line of witches descended from Melinda Warren, a seventeenth century witch that was burned at the stake. The Warren Witches grew stronger with each generation until Patricia Halliwell gave birth to The Charmed Ones, a trio of sisters prophesied to be the most powerful witches the world has ever known. The line continues with their offspring, beginning with Piper's sons, Wyatt and Chris, who have journeyed from the future on occasion to help the current generation.[8]

Patty even ensured the tradition would continue with her fourth daughter, Paige, whom she had to give up at birth. When leaving the newborn at a local church, she and Sam left her in a blanket embroidered with the letter P and requested that she would be given a "P" name.[9] Out of the Charmed Ones, Phoebe was the only one who continued the tradition, resulting in her daughters being named Prudence Johnna, Parker and a Peyton Halliwell.

Across history, witches of the Warren line have often been attracted to or seduced by evil beings.

Halliwell Manor is a Victorian style manor located on 1329 Prescott Street, San Francisco. The original structure was built in 1898, and was rebuilt in 1906 after it was destroyed in the great San Francisco earthquake.[19] The manor has been in the Warren Line for four generations, the first generation being Gordon Johnson and his wife P. Baxter. The Halliwell Manor was built on a Spiritual Nexus and has been the seat of power for the Charmed Ones since their awakening in 1998.

The manor contains many possessions and artifacts of ancestors and family members, the oldest presumably being the blessing cup of Melinda Warren. Other objects include P. Bowen's camera, P. Russell's couch and Penny Halliwell's sewing machine. Additionally, many portraits and photographs of family members are kept in the manor. These were displayed in the staircase, though by 2050, they had been replaced with photos of the Charmed Ones, their parents and children.[20][21] 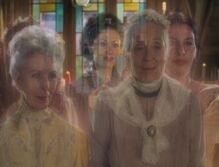 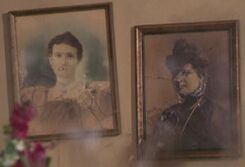 Note that this list contains names from the series, novels and the family tree.

Wentworth: Wentworth as a surname comes from England where there are places in Cambridgeshire and South Yorkshire called Wentworth, probably from the Old English byname Wintra meaning 'winter' + Old English worð 'enclosure'. In other words Wentworth was where the cattle were kept during the winter.

Bousquet: A type of Wine.

Halliwell: Halliwell derives from any of the several places named with the Old English pre 7th Century elements "halig" meaning "holy", plus "well(a)", a well or spring.

Matthews: From the name Matthew. Matthew means "gift of god".