The Circle of Truth

Paige Matthews: "Strict orders from whom?"
Leo Wyatt: "The Tribunal. It's a council made up of Elders and Demons to monitor magic, to make sure nobody ever finds out about its use."
— Leo tells the sisters about the tribunal.[src]

The Tribunal was a neutral council consisting of powerful Elders and upper-level demons to monitor magic, to insure that its existence is never discovered by the mortal world.

The Tribunal created the Cleaners and imbued them with the power to alter reality and the memories of beings to prevent or reserve the exposure of Magic. The Tribunal used the Circle of Truth, an enchanted circle that reads thoughts and shows what needs to be seen, however painful, difficult or sad it may be to be judged by the Tribunal.

A new Tribunal was formed by various magical beings, including the original Tribunal, to deal with the threat of the Old Ones. Every member of this Tribunal has since been wiped out by Prue Halliwell.

The Demon of Fear

The demon Barbas tried to manipulate the Tribunal into thinking that the Charmed Ones were a threat to the safety of the existence of magic, when they were actually set up by him. As a part of his plan, Barbas employed two Phantasms to possess both a criminal and Inspector Sheridan. The possessed Sheridan then taped the Charmed Ones vanquish the other Phantasm with help from Darryl. This exposure caused the Cleaners to alter reality and framed Darryl for murder by making it seem that Darryl shot an unarmed criminal in cold blood.

When the Charmed Ones discovered what had happened, they asked Gideon for help, who directed them to the Tribunal and acted as their counselor. At the same time Barbas appeared to oppose their case after making a deal with the evil Tribunal members. The sisters asked for a chance to clean up their own magical messes, like they had done many times in the past. However, Barbas pleaded to put the sisters themselves on trial for their mistakes.

The Trial of the Charmed Ones

Barbas made a case that the Charmed Ones were too easily influenced by outside magical forces and that because of this, they should not be trusted with the responsibility of cleaning up after all their own magical messes. He also revealed the number of mortals that have lost their lives when developing suspicions about the sisters; including Inspector Reece Davidson, Andy Trudeau and others. Barbas then proceeded to blame Phoebe for the exposure that led to the Cleaners' intervention, saying that it probably wouldn't have happened if she had not been forcing her premonitions and using them as a short-cut for her own benefit. With all this in mind, the Tribunal debated whether the sisters should be allowed to continue practicing magic at all. However, when Leo and Chris revealed that Barbas had set up the sisters using Phantasms, his case weakened considerably, but the Tribunal still proceeded with the trial.

The Tribunal judgement was in favor of The Charmed Ones and Darryl's life was spared. However, they also came to the decision to temporarily strip Phoebe of her Empathy, Premonition, and Levitation powers due to misuse for personal gain. It was said that she could only earn them back by showing a more careful attitude when using magic.

The original Tribunal joined a new Tribunal consisting of many powerful beings, including Avatars and Cupids, to discuss the threat of the Old Ones. The new Tribunal informed the Charmed Ones that the Old Ones could not truly be vanquished, but tasked the sisters with stopping them nonetheless.

After Prue Halliwell seemingly merged with Heremus, part of the new Tribunal kidnapped all who had been affected by her magic. While the Tribunal tried to find a way to stop the Old Ones by extracting memories from Tyler Michaels, Prue broke free from where Tyler banished her. Despite putting up a fight, the entire Tribunal is seemingly slaughtered. However, it is possible that certain members survived, as they were not present during the assault.

After the threat of the Old Ones was averted, Piper, Leo and Coop decided to form a Witch Council to govern themselves instead of being controlled by divine deities.

Members of the Tribunal 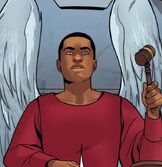 The Judge, a Cupid

The Angels of Destiny 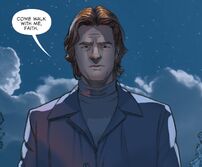 To Summon the Tribunal

The Tribunal appeared in a total of 1 episode and 2 issues over the course of the series.

Retrieved from "https://charmed.fandom.com/wiki/The_Tribunal?oldid=425278"
Community content is available under CC-BY-SA unless otherwise noted.