The Sphaera of Light and Dark

When brought together they can merge the realms

The Sphaera of Light and Dark are two magical spheres that represent the magic of light and dark. One contains the power of the Upper Regions while the other contains the power of the Underworld. When combined, the spheres merge the realms as one and allow a gateway to be opened to the higher realm. The spheres are kept in a vault in the Upper Regions.

After Neena took over the Upper Regions, she broke into the vault and used the spheres to merge the realms, so she could finally be reunited with her beloved.[1] After the Charmed Ones defeated Neena, they worked with the Elders, the Warren line and Leo to seperate the spheres and restore balance.[2]

Spell to Unite the Sphaera

Neena cast this Latin spell to merge the spheres.

Spell to Seperate the Sphaera

The Warren witches and Elders cast this spell to seperate the spheres.

The Sphaera in the vault.

The Sphaera being seperated. 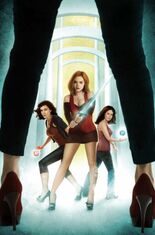 The Sphaera on the cover.

Retrieved from "https://charmed.fandom.com/wiki/The_Sphaera_of_Light_and_Dark?oldid=416870"
Community content is available under CC-BY-SA unless otherwise noted.