The Power of Two

4398019
The Power of Two is the 20th episode of the first season and the 20th overall episode of Charmed.

The evil spirit of a serial killer escapes from Alcatraz Island seeking revenge. It's up to Phoebe and Prue to figure out how to vanquish this evil spirit and stop him from killing again, and they must do it without Piper.

To Vanquish a Ghost and Return Him to His Rest

to fight the evil spirit on the astral
plane it is necessary to join him
in death.
mix the following:

grind to a fine powder and

take with the juice of
cranberries...

after battle is joined,

"ashes to ashes
spirit to spirit
take his soul,
banish this evil."

continue chanting without ceasing
until the evil spirit disintegrates.
this spell must only be
attempted with a partner.
after not more than four minutes
the dead one must be awakened,
lest she too becomes

a spirit in fact. 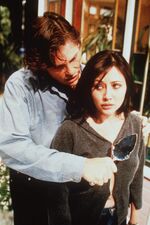 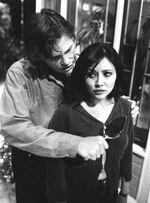 Phoebe: I've been practicing how to call a premonition, and I did it. I saw a future event on command. Oh, and that's the good news. The bad news is... I saw you missing your flight.
Piper: Oh, great.

(The doorbell rings. Prue answers it.)
Prue: Andy, hi.
Andy: Hi.
Prue: I was wondering whether I'd see you again. I thought you might be mad at me.
Andy: No, I just needed some space. It's one thing to suspect what your secret was, it's another thing to actually see it with my own eyes.
Prue: So does that mean that you're okay with it?
Andy: Actually, I'm here on a case, a kind of case where frankly before, I probably would've been looking for a more logical explanation.
Prue: Well, come on in. (They go inside.) What's the case?

Phoebe: Coincidence? I think not. It's got to be the ghost that got off Alcatraz.
Prue: You know, speaking of coincidences. Don't you think it's an awfully big one that your friend saw this ghost?
Phoebe: Prue, if we've learned anything by now, it's that there aren't any coincidences, right?
Prue: Right. (Andy's staring out the window.) Andy, are you alright?
Andy: I don't know. Just getting used to the idea of demons and witches. I don't know if I'm ready for ghosts too.
Phoebe: You ain't seen nothing yet.
Prue: Pheebs.
Andy: But if you're right, if it is the ghost of Jackson Ward that is the killer, how do I stop him from killing again?

(At the cemetery)
Prue: Oh, I hate cemeteries at night.
Phoebe: I hate cemeteries at day. (They hear a noise.) What was that?
Prue: Ah, probably a zombie or vampire.
Phoebe: Great, where's Buffy when you need her?
Prue: Okay, perfect, there it is, Jackson Ward. Do you have the picture? (Prue looks at the picture and Phoebe's written on it.) Hey, Jackson, let's party?
Phoebe: Okay, well, I couldn't think of anything else to write. Can we just do this and hurry?

Phoebe: Is the ghost toast?

Retrieved from "https://charmed.fandom.com/wiki/The_Power_of_Two?oldid=432357"
Community content is available under CC-BY-SA unless otherwise noted.