Charmed
Register
Don't have an account?
Sign In
Advertisement
in: Book of Shadows entries, Demons, Characters,
and 4 more

To be restored to life

Chris Sarandon
The Necromancer was formerly a demon named Armand, who had a tumultuous relationship with Penny Halliwell, the grandmother of the Charmed Ones. Though they truly and passionately loved each other, he betrayed her, causing her to vanquish him. Presumably foreseeing that either she or her descendants would have to deal with his return at some point in the future, she added an entry of him in the Book of Shadows.

According to himself, until the beginning of the 20th century, the Necromancer had been a powerful demon, but was vanquished by unknown means.

Though he was vanquished, his ghost retained the greed for power that he had in life. He began absorbing the spirits of magical beings, which would cause him to temporarily become corporeal. His one main goal, as Penny put it, was to find the most powerful magical spirits possible, and devour them, which would enable him to truly resurrect himself.

Some time later, Penny had fallen in love with another man, Allen Halliwell, and in 1950, they conceived a child, Patty Halliwell. During her daughter's wiccaning, the Necromancer attacked. He wanted to devour every spirit of the Warren line so that he could come back to life, but Penny banished him before he could execute that plan.

In 2003, Penny was summoned to perform a wiccaning for her great-grandson, Wyatt Halliwell. The Necromancer appeared and captured Grams. Using his power of spirits, he seduced her, in hopes of forcing her to summon the Halliwell Matriarchs and absorbing their magic, which he claimed was powerful enough to resurrect them both. He nearly succeeded in doing this, until Paige Matthews cast the Truth Spell on her grandmother. The spell broke his control over Penny, who revealed that, while she still loved him, her love for her family was greater. Using the To Vanquish a Ghost and Return Him to His Rest spell, she banished his spirit for all eternity.

The Necromancer is not a demon
but the ghost of a demon who was
vanquished. Mostly dwelling in the
spirit realm he has dominion over
the dead, although he has been
known to escape to the land of the
living. He no longer possesses
powers of his own but feeding on
the souls of the magical dead
imbues him with temporary life. The
length of his empowerment depends
on the strength of the Spirit.

Right page
Willing to do anything to live!!
A user and a liar 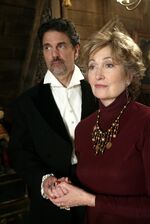 The Necromancer has appeared in a total of 1 episode throughout the course of the series.