The Good, the Bad and the Cursed

4300058
The Good, the Bad and the Cursed is the fourteenth episode of the third season and the 58th overall episode of Charmed.

Phoebe's visit to a ghost town becomes a nightmare, and when Leo can't help her, Prue and Cole must unravel the mystery to save her.

A Time Loop is a Period of Time that repeats itself over
and over again ad infinitum. Sometimes a Loop is
localized to a specific place or group, but at other
times a Loop's effects can be felt globally. A few magical
beings are powerful enough to create Time Loops, such as
Tempus, the Devil's Sorcerer. But the causes of a Loop can
also be more Cosmic. For Example, certain spiritual
traditions believe that a great Evil or great Injustice can be
cursed into a Time Loop until righted. Once the evil has been
eliminated or the injustice has been corrected, Time will
stop repeating itself and again move forward for those
who were trapped in the Loop. 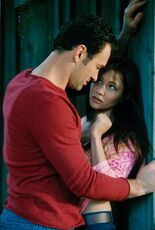 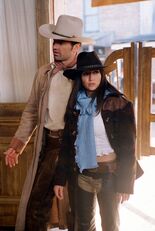 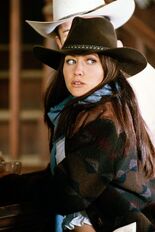 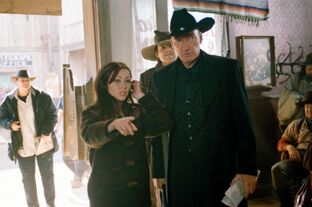 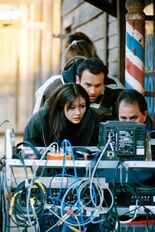 Leo: Piper, he's gonna kill me when he finds out.
Piper: Oh, don't be ridiculous, you're already dead.

Victor: Don't get me wrong, Leo. I want this marriage to succeed, that's why I'm warning you. But there are dangers out there worse than demons and warlocks. You do know about them, don't you?
Leo: Well, yeah, sure.
Victor: Well, the dangers I'm talking about you're not even gonna see coming. The thing I'm talking about will just sneak up on you and destroy your marriage if you're not careful. Leo, do you know what a Whitelighter is?

Phoebe: Well, don't get mad at me, I've been shot.

Cole: Gotta hold my hand.
Prue: This already sucks.
(Prue holds his hand and they shimmer out.)

Retrieved from "https://charmed.fandom.com/wiki/The_Good,_the_Bad_and_the_Cursed?oldid=434557"
Community content is available under CC-BY-SA unless otherwise noted.