The Eyes Have It

"Yeah, she was murdered last night and from what I can gather it seems demonic. She had her eyes gouged out."
—Paige to Phoebe

The Eyes Have It is the 6th episode of the fifth season and the 94th overall episode of Charmed.

Phoebe loses her powers of permonition and, as she struggles to retrieve them, she sees a terrifying vision of The Charmed Ones' death.

In this episode, the spell was adapted because it was cast by Ava Nicolae (with Phoebe and Paige helping her).

Ava Nicolae adapted the To Call Upon Our Ancestors spell in the Book of Shadows, replacing the names of the Halliwell witches with those of the Nicolae Gypsies (her family). She cast it along with Phoebe and Paige to combine Gypsy magic and witchcraft. The spell summoned the spirits of Teresa, Lydia, and Ava's mother (Marina), who protected Ava, Phoebe, and Paige from Orin's power: they deflected one of his own attacks back at him, causing his vanquish.

Marina, Teresa, Lydia...
Nicolae Gypsies stand strong beside us,
Vanquish this evil from time and space.

Lydia was able to disappear in a smoky and fiery cloud.

Paige and Phoebe created a Gypsy Hunter vanquishing potion, helped by Lydia. When Lydia left to warn Ava in the hospital, Phoebe had a Premonition and knew where Lydia was. They went to the hospital as well, but they were too late: Lydia was killed by Cree, right when they arrived. Phoebe then threw the potion, vanquishing Cree. 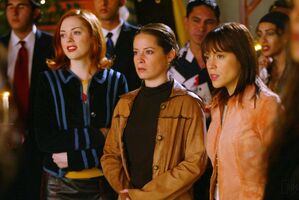 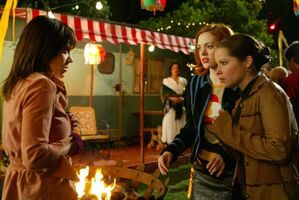 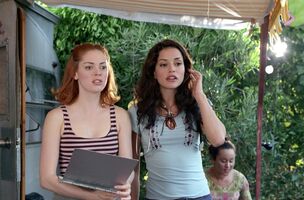 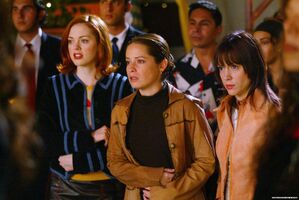 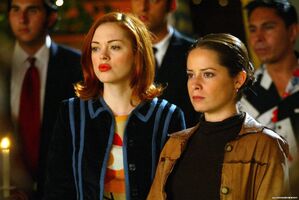 Retrieved from "https://charmed.fandom.com/wiki/The_Eyes_Have_It?oldid=443591"
Community content is available under CC-BY-SA unless otherwise noted.