4399024
The Devil's Music is the 4th episode of the second season and the 26th overall episode of Charmed.

Leo returns to help the sisters save their young neighbor when the manager of a band scheduled to play on Piper's nightclub makes a demonic deal.

A hellspawn collector,
A keeper of souls,
Give him his due,
He'll accomplish your goals.

A collection of Myrrh Bark,
Mixed with Sarresh,
Along with crushed Bear Root,
In Water so Fresh.

Combine these together,
Bind them as one,
Contribute crow feathers,
Your task is soon done

The Demon must drink this
To relinquish his victims,
To consume this foul broth
Is his benediction. 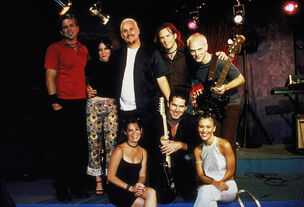 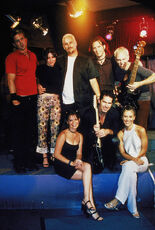 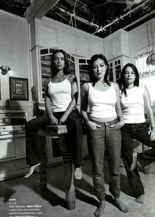 (Piper walks in the kitchen.)
Piper: (excited) Guess what I did. Guess what I did, all by myself.
Phoebe: What?
Piper: You ready?
Phoebe: What?
Piper: Get this... Dish...walla... my club... playing there... tonight.
Prue: What?
Piper: I networked. Sent out feelers, sent off press releases and wouldn't you know it. Dishwalla decided to put P3 on their schedule. How's about that? P3 has officially been validated as the place to be. We're on the map (then, she hugs her sisters) I couldn't have done it without you, you patient (she kisses Prue) most generous (kisses Phoebe) sisters in the whole wide world. (Doorbells rings.) I'll get it. (She answers the door.) Leo... this day just keeping getting better. Hi.
Leo: Hi, uh, Piper, we have to talk.
Piper: Yeah...okay, uh... are you free tonight? Better be, ‘cause you're my date. We have backstage passes, all access, baby, to see Dishwalla at P3. I made it happen.
Leo: Uh, no, actually, I made it happen.
Piper: What?

Leo: Hi.
Piper: Hello!
Leo: Listen, I was hoping that we could uh... talk
Piper: Sure... Leo this is...
Leo: Dan Gordon!
Piper: Wait. You know him?
Leo: What? Are you kidding? He used to play second base for the Mariners. Ha had an all-star season going till he blew out his knee sliding into home. I still think you were safe.
Dan: So do I.
Leo: I'm Leo.
Dan: Nice meeting you.
Piper: No, it's not. You follow baseball?
Leo: Yeah!
Piper: You have time for baseball, but you don't have time to tell me about you-know-what, before you-know-who shows up you-know-where?
Dan: Uh, listen. If you two need to talk or something, I can...
Piper: No, no no. We don't need to talk. Leo stops by occasionally to fix things. Phoebe can show him around. (Phoebe shows up.) Ahem! Let's go talk to Jenny.
Dan: It was nice meeting you.
Leo: Yeah, you too. (Dan and Piper leave.)

Prue: Look, we don't know for sure if the demon is gone, if he is still here, then he's gonna feed again and Carlton's the one to feed him. Do you still have the poison pill?
Phoebe: Yes, but I don't think it's gonna be enough.
Prue: Phoebe, stop. All right, uh, we need to cover the exits, look for Carlton, if we see him grab anybody, Piper, you freeze the room and we'll get into positions.
Piper: I wish we could just stuff his head in a toilet and make him cough up the demon.
Phoebe: Oh, honey, still upset with Leo?
Piper: I'm talking about Carlton.
Phoebe: I can't keep up.

Retrieved from "https://charmed.fandom.com/wiki/The_Devil%27s_Music?oldid=444182"
Community content is available under CC-BY-SA unless otherwise noted.