4399027
That Old Black Magic is the 6th episode of the second season and the 28th overall episode of Charmed.

An evil witch hunts for her magic sceptre, which Prue has found, while Leo, Piper and Phoebe must locate the Chosen One to keep the powerful sceptre out of evil's hands.

Scrying For Something Lost

a crystal on thread

Name what is sought
and the point will show

The entry in the Book of Shadows.

Phoebe "scrying" for the first time.

To Disempower a Witch spell

To Disempower a Witch

Tuatha casts this spell in 1999 to strip the Charmed Ones of their powers. The first time she cast this spell was solely to remove Prue's power however, after killing two more innocents and stealing their hearts for her spell, she was able to cast it a second time.

A Red Ribbon Tie
Round a Fresh Human Heart.
The Witch's Powers
Will Then Depart.
Enchant the Following:
Before The Passing of 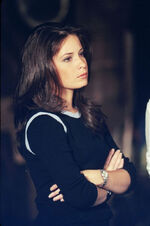 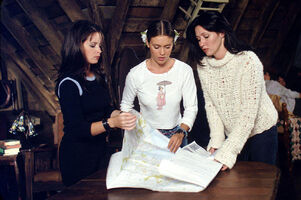 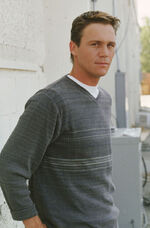 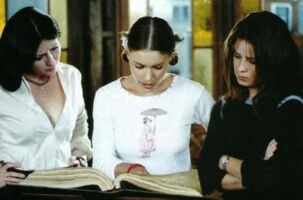 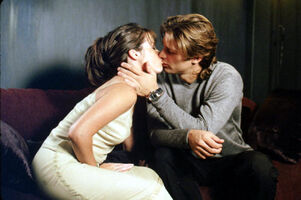 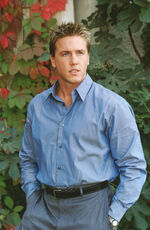 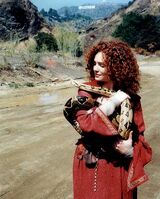 (Piper and Leo walk in the solarium.)
Piper: It's not that it isn't great to see you, Leo, because it is. But you can't just orb in whenever it's convenient.
Leo: It's never been a problem before.
Piper: Yeah, well, things have changed.
Leo: I can see that.
Piper: Leo ...
Leo: Sorry, wasn't fair. Where's Prue?
Piper: At work.
Leo: Fine. Then we'll have to start without her and your friend Dan has to leave now.
Piper: Oh, really? Why?
Leo: Because you and your sisters have a very big problem. A magical problem. Look, this isn't personal, it's business.
Piper: What else is new?

Piper: Okay, so how old is he now?
Leo: See, over there. (Leo points and you see a teenage boy getting picked on.)
Piper: He's a high school student?
Phoebe: And he's a nerd.
Leo: Hey, I didn't choose him, they did. If he can help save your lives, that's all I care about.
Piper: Leo, he's a teenager. How can we let him go up against Tuatha? She'll destroy him.
Leo: Not if he finds the wand and learns how to use it. Besides, she knows he's the Chosen One. If we don't help him, she'll find him and destroy him anyway.
Phoebe: Doesn't sound like we have much of a choice.
Piper: This is wrong. He should be battling acne at his age, not evil witches.

(Prue, Piper and Phoebe run in.)
Phoebe: What was that crash? What happened in here?
Leo: A little training, that's all.
Prue: That's all? Do you have any idea how much that's gonna cost to fix?
Piper: Well, I know who's gonna be fixing it. Leo, what if somebody saw you?
Leo: Someone like neighbour Dan? Hey, you're bleeding. (You see a cut on Piper's forehead.)
Piper: It's nothing.

Phoebe: Okay, this is the potion to induce sleep, this one is to repel an evil threat, and that one puts out a fire.
Prue: What kind of potion does that?
Phoebe: None. It's water. (a look from Prue) I didn't have a lot of time, it was the best that I could do, okay?

Retrieved from "https://charmed.fandom.com/wiki/That_Old_Black_Magic?oldid=432292"
Community content is available under CC-BY-SA unless otherwise noted.