The Halliwell sisters must cast a spell that returns them to the mid-'70s in order to save themselves from a warlock that is immune to the powers of The Charmed Ones.

To Unbind a Bond

The bond which was not to be done,
Give us the power to see it undone,
And turn back time to whence it was begun.

To Return to Your Own Time

A time for everything,
and to everything its place
Return what has been moved
through time and space.
Requirements: Power of Three

Cleanse this evil from our midst
Scatter its cells throughout time
Let this Nick no more exist.
Use the ingredients of the spell by
pouring in your Sacred bowl. 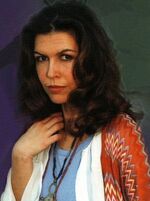 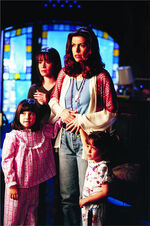 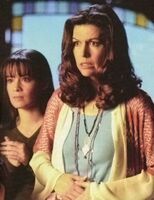 Nicholas: Five chimes.
Piper: Excuse me?
Nicholas: I only heard five chimes. It's noon. That means you froze me. Which means you have your powers at last.
Piper: Uh, I don't know what you're talking about Mister but thanks for the flowers, okay, bye.
Nicholas: Call me Nicholas. Your mother did.

Piper: And you saw us? As kids?
Prue: Yeah.
Piper: This can't be happening. I'm getting a migraine.
Phoebe: Better not, I don't think Advil's been invented yet. And apparently, neither has the spell. It's not in here anywhere.
Piper: But we just cast it, that's how we got back ... here.
Phoebe: Yeah, well, wherever here is, it's before the spell was written.
Prue: So, there's nothing in here about how to get back to our own time?
Phoebe: Nothing. Uh, let me be the first to say we're screwed.

Phoebe: Coast is clear.
Piper: What if Grams catches us?
Prue: She'll kill us before Nicholas has a chance.
Phoebe: She won't catch us. Observe. (She opens the heating duct and they can hear Grams and Patty talking.)
Patty: You said yourself the girls are safe with you. Besides, I want to go.
Grams: You are making a big mistake Patty, Victor is not coming back.
Prue: How did you ...?
Phoebe: Heating duct to upstairs. I used to listen to you guys for hours. Especially when you used to sneak Andy up to your bedroom in high school.
Prue: Oohh...

Grams: Where was I born?
Patty: Mom...
Grams: I'm still not convinced that they're not warlocks.
Patty: We have a pact to undo. We should be looking for a spell...
Prue: Boston. In a hotel room. Breach.
Grams: What was my husband's name?
Prue: Which husband?
(The girls giggle)
Grams: Who's Melinda Warren?
Phoebe: The beginning of our family line. She gave us our powers. Our destiny.
Grams: What's the secret ingredient in my blueberry cobbler?
Piper: Honey, and a splash of rum.
Grams: What's IBM selling at in your time?
Patty: Mom!
Grams: What?
Patty: This is not the time for personal gain.
Grams: You're right. If they could just nod their heads...
Patty: (quietly) Stop it.
Grams: (quietly) Okay, forget it. (then...) Look at you. The three of you. Oh, Patty, I always knew that I would deliver The Charmed Ones.
(Patty makes a face)
Grams: Uh... once removed, of course. Prue. Piper. And...
Phoebe: Phoebe!
Grams: Oh, another "p", what a surprise.

Piper: What? I'm supposed to throw out perfectly good flowers because they came from a creep? If that was the rule, we'd never have flowers in this house.