Terra was a Life Essence created by the Alchemist Kierkan. She wanted a more independent life, and escaped from Kierkan's lair in order to possess one of the Charmed Ones and vanquish him. She possessed a businessman and forced him to lead her to the sisters and later managed to possess Piper Halliwell. She succeeded in vanquishing Kierkan, but was later vanquished herself when she was discovered.

Kierkan took Terra's desire for independence for ingratitude, since he created her out of his blood. Terra thought he saw her as just his masterpiece. Just as Kierkan was about to suck Terra back into her essence bearer, Terra stabbed herself with a knife, as it was the only way to leave a body, and escaped the lair.

Believing that possessing a Charmed One was the fastest route to greater power, she possessed a businessman in the street and used his body to find the Halliwell Manor. At the manor, the man begged Terra to get out of his body, as he was starting to suffocate. Terra refused, pointing out that the suffocating feeling was because his soul was dying.

While at her ten year reunion at P3, Terra followed Piper as the latter took out the trash. Terra then stabbed herself with a knife, and as Piper bent down to help, Terra possessed her. After Terra stood to one of Piper's classmates, Piper was able to warn Prue that something was wrong. Just as Piper was about to explain, Terra regained control, acted like nothing happened and went back to the manor. Meanwhile, Kierkan found the businessman's body and brought him back to life long enough to find out where Terra went.

Terra tried to get Piper to tell her what her powers were, knowing that Kierkan was after her. Piper refused unless Terra left her body. Terra called P3 and told Prue that there was a demon in the manor. Prue suggested that Piper freeze the demon until she and Phoebe could get back. Terra then threatened to kill Phoebe and Prue if Piper didn't tell her where the Book of Shadows was.

Just after she found the spell, Kierkan broke into the manor and knocked Terra down. Before Kierkan could trap her in the essence bearer again, Terra froze him. Prue and Phoebe then came home and they chanted a Power of Three spell to vanquish Kierkan. As Kierkan went up in flames, he told Prue and Phoebe that he could have helped them, but that "she" would destroy them.

The sisters went to the attic, suspecting that a female demon was after them. As Terra began to leave the attic, Piper once again gained control over her body and voiced weakly to Prue that she was dying, but Terra made up another excuse to get out of the room.

Knowing that Piper's soul was burning out, Terra was determined to stay in her body. When Piper begged her to leave, Terra reminded her that the only way she could do so is with a knife to the heart. Piper saw Leo orbing into her bedroom, and told Terra that her boyfriend "Tom" would know something was amiss. When Leo kissed Terra, he noticed that her kisses weren't the same. Terra blasted him with an Energy Beam, knocking him out. She then went to P3 and started seductively dancing on the bar.

When Prue and Phoebe realized that Piper was possessed, they rushed to the club. They tried to expel Terra with a spell, but the spell required the Power of Three. Terra reminded them that since she was created from Kierkan's blood, she had an alchemist's powers. She tried to head back to the party, but Prue flung Terra onto the dumpster. Prue then knocked her out by knocking her over the back of the head. They brought her back to the manor, and Prue flung a knife into Piper's stomach, releasing Terra's essence.

After Prue stabbed Terra, Leo rushed over to her aid. Terra's essence then floated out of Piper's body and possessed Leo. This was actually part of Prue's plan; as she figured that since Terra has an alchemist's powers, she could bring Piper back to life. Prue offered to let Terra keep Leo's body if she brought Piper back to life; otherwise, she would go back in the essence bearer.

Terra reluctantly agreed and resurrected Piper before destroying the essence bearer. The sisters then used the spell Prue and Phoebe wrote earlier to eject Terra from Leo. Terra realized she had been double-crossed and tried to blast the sisters, though Prue deflected the attack. Terra's essence was then expelled and automatically vanquished, as she could not survive without a body.

To Expel a Life Essence 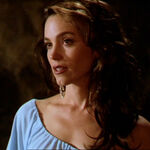 Terra appeared in a total of 1 episode over the course of the series.