Charmed
Register
Don't have an account?
Sign In
Advertisement
in: Characters, Demonic sorcerers, Book of Shadows entries,
and 4 more

The Source of All Evil

Déjà Vu All Over Again

"This is why I have been sent to you, to keep resetting time until you learn from your failures."
—Tempus to Inspector Rodriguez.[src]

Tempus, also known as the Devil's Sorcerer, was a powerful and respected Demonic Sorcerer with the ability to manipulate time. He answered directly to the Source of All Evil.

Tempus was sent by the Source in 1999 to help the demon known as Rodriguez, to defeat the Charmed Ones. Every time Rodriguez failed to kill them and got vanquished, Tempus reset time, allowing Rodriguez to be resurrected and learn from his mistakes, giving him another chance.

Tempus and Rodriguez were the only ones who knew about this, until Phoebe started having a strange sense of déjà vu and began to feel that they were in a time loop, which she theorized because of her power of premonition.

Defeated by the Charmed Ones

Rodriguez killed Andy Trudeau, and once the sisters figured out what had been happening, they cast a spell to accelerate time, therefore breaking the time loop and taking Tempus out of his time. Tempus, temporally defeated by the Charmed Ones, fled back to the Underworld and Rodriguez was vanquished by Prue telekinetically deflecting his energy ball.[2]

In 2001, the Charmed Ones and Shax were exposed on live television. The sisters figured they needed to contact Tempus to reset time to before they were exposed, but none of them knew how. Their Whitelighter, Leo, decided to go to the Underworld, and ask Cole Turner to get the Source to contact Tempus, bearing in mind that exposure is still a problem for evil.

When Cole asked the Source, he stated that Tempus was still weakened from his last encounter with the Charmed Ones, and doing so again could destroy him. But later the Source accepts their offer, after making a deal with Phoebe for her to stay in the Underworld, and had Tempus reset time.[3]

Manipulator of time
Serving only his will always,
always for evil's gain.

Remove him, remove him,
from the time he is in. 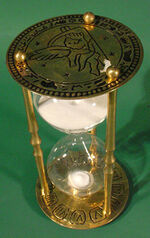 Tempus appeared in a total of 1 episode over the course of the series.