"I'm not dead. I'm Death. As if my life wasn't busy enough already."
—Piper to Phoebe

Styx Feet Under is the 5th episode of the seventh season and 139th overall episode of Charmed.

A bloodthirsty demon, set on destroying his human half, goes on a deadly rampage to kill his remaining blood relatives. Piper is "killed" so that she can help the Angel of Death clean up the mess.

Arthur is still alive, despite the hole in his belly.

Arthur dies after the Angel of Death reversed the spell with Sirk's help.

The potion bottle in Paige's hand. 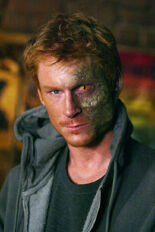 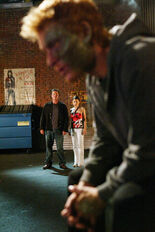 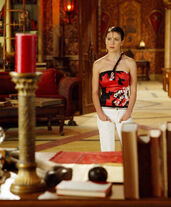 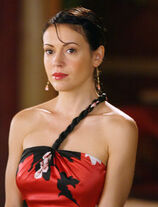 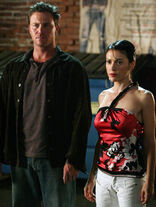 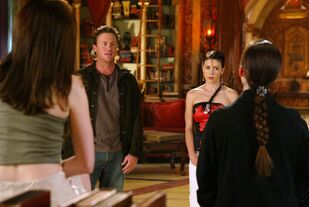 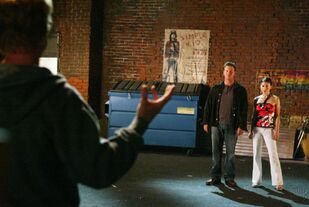 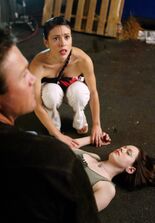 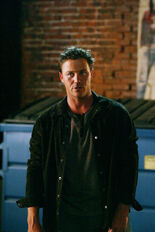 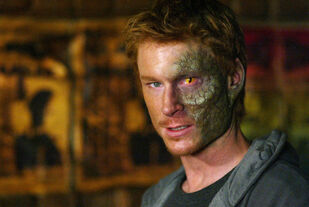 Paige: You know, it's okay. I cast a protection spell on the innocent, so it should be all right.
Piper: Excuse me? You did what?
Paige: I cast a protection spell, because, you know, you can't keep watching them all the time.
Piper: Paige, protection spells backfire. That's why we don't use them.
Paige: Don't worry about it. I got the spell from my best grad student. I'm all over it.
Piper: Well, you better be, because the chaplain's on the move.

Piper: It sure as hell isn't my problem.
Paige: Stop yelling at Death.

Paige: Okay, long story short. Um...Death has temporarily recruited Piper.
(Piper holds out her hand and a parchment appears.)
Piper: And now I have to collect all the souls on this list before the coroner starts cutting up my body.
Phoebe: Cutting up your body?
Piper: Autopsy.
(Phoebe gasps.)

Sirk: You can't be taking her seriously.
Phoebe: Dude, you're dead. Start acting the part.
Angel of Death: This has been quite a remarkable day. Even for me.