This article is about the spirit board owned by the Charmed Ones.
You may be looking for spirit boards in general.

The spirit board of the Halliwell family

Contacting the spirit world or others in the Physical Plane.

The Spirit Board is an object owned by the Halliwell family. The object acts as a conduit for communication between witches and spirits.

The spirit board was stored in the manor's basement for several months until Prue Halliwell found it again when searching for the circuit tester, in early October of 1998. When she showed the board later that evening to Piper, they both discovered they had forgotten that their deceased mother had inscribed a message on the back:

To my three beautiful daughters, may this give you the light to find the shadows. The power of three will set you free. Love, Mom.

According to Piper they never understood what their mother meant, to which Prue replied that they should send it to Phoebe because she was so in the dark and maybe a little light could help. 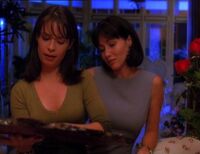 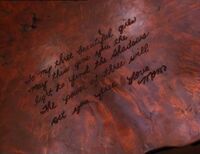 Over the years, the Charmed Ones have used the spirit board on a few occasions.

Finding the Book of Shadows

On the night she returned home, Phoebe Halliwell and her sister Piper were catching up while playing with the spirit board. When Piper went to get some more popcorn, Phoebe's hand (which was touching the planchette) moved along with the planchette without her doing anything. Shocked, Phoebe called for Piper. Joining them was Prue, having her the noise, and asked what was happening. When Phoebe explained that the planchette began to move on its own, both Prue and Piper thought she was playing a joke on them. Prue returned to what she was doing and when Piper was about to do the same, the planchette moved again. Shocked, Piper called for Prue who came back, grunting. Phoebe, who had written down the message on an envelope, showed it to her sisters. The message spelled: "A-T-T-I-C". This led Phoebe to go to the attic, which had been closed off ever since they could remember, and found the Book of Shadows and the spell that unbound their powers.[1]

Whilst cleaning the attic, Prue received a message on the spirit board from a young boy named Max (through Leo's help), who had been kidnapped for his powers. All he wrote was "Help Max", but it was enough for Prue to go to Andy and asked if they had any records on a Max that needed help.

Prue took the spirit board with her to work where she received a second message shortly after Andy arrived at her office. While Andy explained that a "Max Franklin" was involved in a break in, Prue received a second message from Max: "Kidnapped, Auto shop". Prue would eventually talk to Max's father and could find the auto shop were she found Max and could help him.[2]

Unable to figure out the name of the demon who stole their Book of Shadows, Phoebe and Piper consulted the spirit board for help. Focusing themselves, they heard their grandmother whisper to them: "The Power of Three", after which the planchette began to move, spelling out: A-B-R-A-X-A-S.[3]

Trapped in an unknown plane, Prue tried to contact her sisters through the spirit board. However, she was interrupted every time she tried by War, one of the Four Horsemen of the Apocalypse, who was also trapped in that plane. While War was chasing Prue, he shoved the planchette from the board onto the floor, breaking its glass out of it.[4]

Billie, Christy and the Doll house

Trying to find her sister, Christy Jenkins, who was kidnapped 15 years earlier, Billie consulted all magical resources she could find at the Halliwell Manor. She read through Book of Shadows and borrowed the spirit board to try and make contact with Christy.

Meanwhile, the Charmed Ones were kidnapped one-by-one themselves and were replaced by demonic doubles. They had been trapped inside the doll house replica of the manor and were unable to use their powers. Remembering that Billie had the spirit board at her side, they Charmed Ones combined their powers to send a message to Billie. She received their message, when she was scrying with her laptop, first thinking it was from Christy. However, since the message spelled out "D-O-L-L-H-O-U-S-E", Billie had no clue what it meant. She ran upstairs to the impostor-Charmed Ones and told them that she had gotten a message through the spirit board spelling "Doll house", asking if it could possibly refer to the doll house replica of the manor. However, the impostors, fearing that Billie would find out they weren't the real Charmed Ones, told her off and orbed her to the front porch. Billie ran back inside and into the attic, which was now deserted as the impostors had gone back to check on the real Charmed Ones. Before her eyes, the doll house appeared before her through orbs, with the tiny Charmed Ones inside. Finally understanding the message, Billie helped the Charmed Ones defeat the impostors.[5]

The Halliwell spirit board was made from burl wood with the letters, numbers and triquetra applies under a resin top coat. The planchette was made from Cocobola wood and has the traditional, slightly heart-shaped form with a triquetra engraved in the point and a bevelled glass lens. Patty's message was carved into the wood by hand.

Retrieved from "https://charmed.fandom.com/wiki/Spirit_Board?oldid=433651"
Community content is available under CC-BY-SA unless otherwise noted.