Performs the desired effect of the spell cast

Spell Casting is the magical ability to cast spells and perform rituals. It is one of the basic powers possessed by witches and warlocks, the others being Scrying, Potion Brewing, and Mediumship. Although a basic power for beings like witches, it is rare for other beings such as demons to possess this power, as it is usually only possessed by powerful upper-level demons.

Some spells require more than one witch to make them work in order to increase the amount of magic and therefore potential power available for the spell. For example, the spell to vanquish the warlock Jeremy Burns is a Power of Three spell.

The demon Abraxas revealed that by reading a spell backwards correctly, one can reverse the effects. For example, the spell to vanquish the Woogyman will instead summon it when said backwards, and the spell to invoke a witch's powers will rebind them if read backwards.

All spells contain a spoken component, or incantation. An incantation is written and recited as verse. They vary widely in length. They may be as short as two lines, or can can be a dozen or more lines in length. Four lines seems to be the most common length for spells used in the series. Most contain rhymes, although some do not. Typical rhyme scheme include couplets (A,A,B,B) or interlocking couplets (A,B,A,B). Some incantations are in a foreign or undecipherable language but still work effectively. For the few weeks that Drake dè Mon was alive, he taught students of Magic School the tempo and rhythm of spells when casting them. He seemed to use '20s music and dancing to teach them. A spell can also be written as a Haiku, as shown by Paige Matthews.[1] According to Phoebe Halliwell, for a spell to work the caster must state in the incantation what is lacking before stating what is needed.[2]

An Enchantment is a kind of spell in which the magical effect is invested in an object. The object can then be used to invoke that magic. Jewelery seems to be a common choice for creating enchanted objects. There is a spell in the Book of Shadows called the "Enchantment Spell" that can be used to cause an object to reveal evil nearby.

Form of the Ritual

Some spells consist of only an incantation, but others have additional components as well. A spell may require the use of certain tools or ingredients. For example, seance requires five white candles, a sprig of sage and the Power of Three. A spell may also require certain actions to be performed, such as burning a piece of paper with specific things written on it. 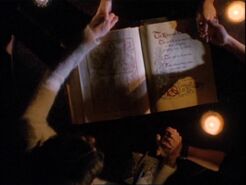 The Charmed Ones hold hands as they recite a spell. 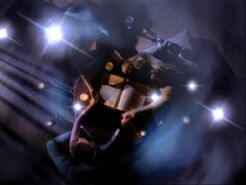 The powers leave the sisters. 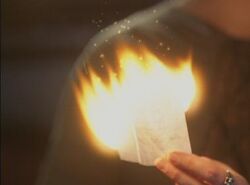 Spells are capable of producing a wide variety of effects, both harmful and helpful. They can produce physical changes in a person or object, such as turning a person into a dog or placing protective powers in a talisman. They can also have profound mental effects such as enhancing intellect, altering memory, manipulating emotions, or causing magical compulsion (such as forcing someone to speak truthfully). Spells can manipulate other kinds of magic, such as binding (preventing the use of) a witch's powers, transferring powers between individuals, breaking magical barriers, or lifting curses.

Vanquishing spells are spells used to defeat strong demons and warlocks. Each one is usually unique, designed to defeat a single, specific individual. Often, they require the Power of Three.

The subject of a spell can be affected at a distance. Spells have been depicted as effective when the incantation was transmitted over telephone lines,[3] or when it was recorded and played back at a different place by someone else.[2]

Some spells, such as those used to vanquish demons and warlocks, have a momentary duration. Others are persistent, and continue to have their effects on their subjects until they are specifically reversed. A few are self-ending: the magic fades after a predetermined length of time, or when certain conditions are met i.e. the spell has played out. Many spells, especially those used for personal gain, have consequences, and can backfire on the caster in undesirable ways.

"You misused magic to make him the object of ogling, and the spell backfired and did the same thing to you."
—Phoebe to her younger sister Paige, who at the time was new to the craft.[src]

Despite Grams implying that witches are capable of anything, it is safe to assume that that is not completely true. Magic seems to be semi-conscious. Just like asking a genie to grant a specific wish; there are often loopholes the wisher, or caster, can fall into if they are not very specific. Spell backfiring is also a common problem.

Spell backfire can result from:

In addition to the possibility of backfire, the spell's effect may be very weak, or may not even work at all. This implies that the willpower and innate magical strength of the witch has an affect on the spell's success. For example, Penny and Patty Haliwell cast a spell to send the Charmed Ones back to the future... but they only succeeded in sending them forward 10 seconds, and Prue Halliwell was only able to injure the spirit of Jackson Ward while casting the "To Vanquish A Ghost" spell, and only manages to finally vanquish the spirit when she truly means to vanquish him; in other words, she felt strongly enough in her conviction to vanquish him. Also, when Prue was alive, she and Piper were powerful enough to vanquish Shax. Following her death, the Power of Three was needed.[4][5][6][7]

Extra material components, potions, or rituals may or may not be necessary for a spell. This is implied by the sisters' tendency to make up new spells on the fly with nothing but the incantation. Instead, the extra components may just help to magnify the spell's strength.

Spells can, at times, replicate powers, such as Gram's "Freezing Spell", stopping Piper in her tracks, and achieve more spectacular effects, such as the "To Lose a Love Forever" spell, Phoebe's (although failed) "Flesh to Stone Spell", and the "Obscuring Mist Spell".[8]

While many spells and curses are long-lasting and permanent, a large multitude of those are also designed to last for as long as the person who cast them is alive. Once the caster is dead, the magic will lift and the spells will be undone, depending on its purpose.

Examples of the following: