4301118
Soul Survivor is the 7th episode of the sixth season and the 118th overall episode of Charmed.

Paige discovers that her new boss has sold his soul to the demon Zahn. Despite her sisters' pleas, Paige makes the ultimate sacrifice to save her boss.

A lower-level
demon
and soul trader
who specializes
in demonic
contracts and
demonic law. 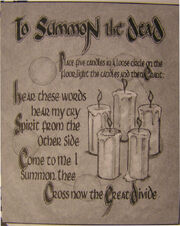 Place five candles in a loose circle on the
floor, light the candles and then Chant:
Hear these words
hear my cry
Spirit from the
other side
Come to me I
summon thee
Cross now the Great Divide.

Phoebe and Piper reversed this spell to send themselves to Paige.

Piper and Phoebe used this spell to summon Zahn. They wanted to give him one chance to give up Larry's soul, otherwise they'd vanquish him, but before they could even start talking, Paige and Richard summoned him as well.

We call upon the Ancient Powers,
To summon one to save a soul.

Piper: No, it's not how we work.
Paige: Well, if I hadn't did that Larry's soul could have been lost by now.

Phoebe: Hey, look who it is. Where have you two been?
Leo: Long story.

A Grimlock: 100 powers for all three.
Piper: Sold, to the dead Grimlock.

Retrieved from "https://charmed.fandom.com/wiki/Soul_Survivor?oldid=434638"
Community content is available under CC-BY-SA unless otherwise noted.