Something Wicca This Way Goes...?

"Let's be real. It's over. He's got our house, he's got our Book, he's got two of our powers. I mean, the only real question is whether or not we could take him down with us."
—Phoebe Halliwell

Something Wicca This Way Goes...? is the 22nd episode of the seventh season and the 156th overall episode of Charmed.

Zankou steals Phoebe's premonition power and thwarts The Charmed Ones' attempts to reclaim the Book of Shadows. The sisters realize that the only way to stop Zankou may be to sacrifice themselves.

This spell was put into the Book of Shadows by the Elders a long time ago as a last resort, in case good lost control of the Nexus and to keep it from evil. It was used by the Charmed Ones to vanquish Zankou.

From ancient time this power came,
For all to have but none to reign.
Take it now, show no mercy,
For this power can no longer be.

To Summon a Nexus

To Transform Zankou into a Pig

Something wicked in our midst, in our home where he exists.

To Reverse the Transformation Spell

Reverse the spell, from whence I fell.

To Separate a Witch from Her Powers - Used by Zankou to take the Piper and Phoebe's powers for himself. 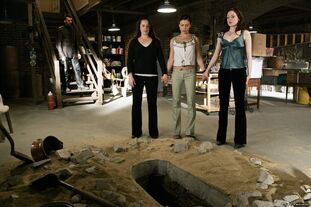 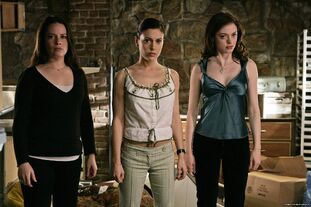 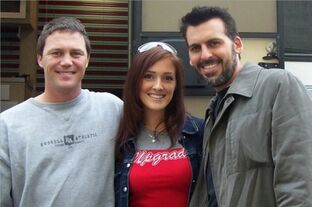 Zankou (When explaining to Kahn about the Charmed Ones): You can't take them head on. It doesn't work. That's how demons die. Not this demon, not this time.

Paige (At Magic School): I don't think we're getting out of this one, girls.

Piper (After the sisters' astral selves returned back to their bodies): Thank you, Prue.

Zankou (After absorbing the Nexus): You can't stop me now.
Paige: Oh yeah?
Piper: Watch us.

Darryl (Seeing the sisters and Leo in their new identities walking away from the manor)(laughing): Well all right, all right.

Piper: Wasn't there a confidence spell in the Book of Shadows?
Phoebe: Yeah. Remember, we cast it on that waiter at Quake?
(Piper's eyes widen)
Piper: Wow. Quake. That was a long time ago.

Retrieved from "https://charmed.fandom.com/wiki/Something_Wicca_This_Way_Goes...%3F?oldid=425618"
Community content is available under CC-BY-SA unless otherwise noted.