"Someone to Witch Over Me"

Someone to Witch Over Me

"Guess I never knew how much my guardian angel actually helped me. Even with the little stuff."
—Paige to Kyle Brody

Someone to Witch Over Me is the 7th episode of the seventh season and the 141st overall episode of Charmed.

Paige's decision to help Agent Brody brings the sisters face-to-face with an evil demon, Sarpedon, who captures innocents' Guardian Angels for his own protection. Piper and Phoebe die at the hands of Sarpedon but Leo can save them - but only if he turns over his free will.

Celerity Demons are powerful beings
who can move at the speed of light
and feed off of lesser demons.
Proud, solitary, aggressive and
with quickness faster than human
sight they are very difficult to both
find and fight.

However, destroying one is
possible...Boil mandrake root,
hummingbird wings, eye of newt and
Sagan's Strings.

Paige casts the spell so she could see the guardian angels.

Show me what the evil sees,
Even if at lightning speeds. 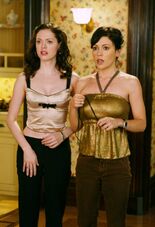 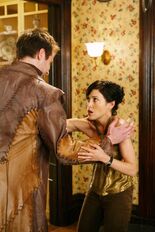 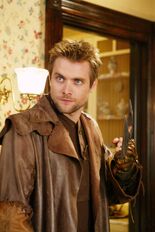 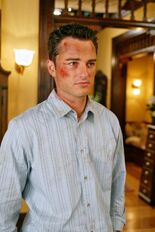