"They may be powerful but they are no different than any other woman when it comes to love."
—The Siren to a Demonic Healer

Siren Song is the 4th episode of the fifth season and the 92nd overall episode of Charmed.

Piper and Paige try to save Phoebe's life from the scandalous Siren while Piper and Leo's personas are switched by their unborn child.

As a mortal the Siren fell in
love with a married man, but
when they were caught, the man
was held blameless. The village
women cheered as they burned
her to death and her rage turned
her into a Siren; a vengeful demon
who seduces married men with her
song, then destroys the couples
with the very flames that consumed her.

Paige nonverbally cast a spell from the Book of Shadows to fix the front door. After casting it, she said "Abracadabra!" like that spell fixed the door. The spell she cast could've been the Vanishing Spell, as it is seen fixing things before, like the broken windows in Cole's penthouse in Womb Raider. However, the spell Paige cast wasn't seen, so it remains unsure whether it was the Vanishing Spell or another spell that was capable of fixing broken things.

To Summon a Siren

Leo wrote this spell to summon a Siren. He gave the spell to Phoebe, who made fun of it. However, they didn't need the spell, because Phoebe was lured to the Siren and Piper was then able to sense her.

Oh singing lady of the dusk,
Who preys on men, turns love to lust,
We hearken ye into presence,
To vanquish thee evil essence.

The Siren luring David and Melissa.

The Siren using Kiss of Death on David.

Melissa thrown across the room by the Siren, using Telekinesis to increase her strength.

The Siren using Pyrokinesis to start a fire.

Cole turning up the TV's volume.

The Siren luring a man.

The Darklighter apports his crossbow.

The Darklighter apporting an arrow.

Piper created fireworks instead of blowing the Darklighter up.

Paige orbs the Darklighter crossbow into her hands.

The Siren smokes in.

The Siren using Kiss of Death on Leo.

Paige orbing in with Piper.

Leo orbing out with Melissa.

Piper's power is pacified by her unborn baby.

Piper is thrown out of a window by the Siren.

The Siren smokes out.

Paige orbs in with Piper.

Melissa is frozen by Piper.

Leo blows up the glass of the front door.

The Demonic Healer smells the Siren was wounded by a Charmed One.

Paige orbing out with Piper.

Piper orbing out with Leo.

The Siren uses her Kiss of Death on Cole.

Phoebe is flung by the Siren.

The Siren starting to smoke out.

Piper orbing in with Leo.

Leo blows up a vase in the Siren's lair, missing the Siren.

Leo blows up something else in the Siren's lair.

Leo manages to blow up the Siren.

Piper and Leo's powers are swapped back.

Piper blows up a bagel. 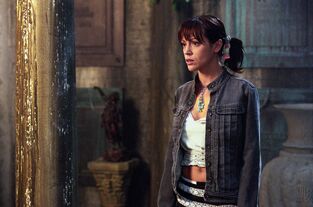 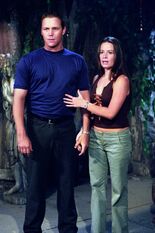 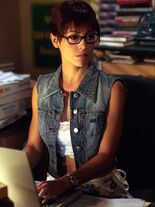 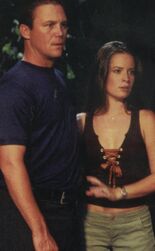 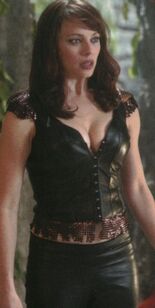 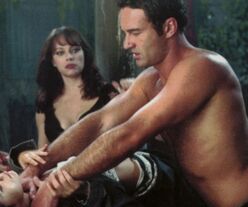 Phoebe: Most men don't try to kill their wives when they're under the Siren's spell. Most men just kiss and die. But because you're a demon…
Cole: I'm not…
Phoebe: Okay. Well, because you have demonic powers and a lot of them, you became a bigger threat… than the Siren. And that's only one way out of a thousand that your powers can turn against me.
(Cole pauses)
Cole: I guess I didn't want you to be right.
Phoebe: (sadly) Neither did I.

Piper: You know, Paige, there is another part of you. Your birth father was half whitelighter.
Paige: Yeah. He also had blue eyes. Doesn't mean that I do!

(Leo has an emotional outburst)
Leo: I don't know what's wrong with me.
Paige:: Dude, it's the crying thing.
Phoebe: It's the hormones.
Leo: Really? I just thought that was an excuse.
Phoebe: Welcome to our world.

Leo: Uh, shouldn't we concentrate on swapping our powers back?
Paige: Now, Leo, you know how that works. You two are only going to get your powers back once you've learned your lessons.
Piper: Ugh. I hate that. It's just so very after-school special.

Paige: Abracadabra!
(The manor doors magically repair)
Phoebe: Nice job!
Piper: You did all that with 'abracadabra'?
Paige: Nah. I used a spell. I just always wanted to say that.

(Piper and Leo are arguing, when Paige enters with the Book of Shadows)
Paige: I think I found the demon. (pauses) Am I interrupting something?
Piper: Yes. What does the book say?
Paige: Well, "As a mortal, the siren fell in love with a married man, but when they were caught, the man was held blameless."
Piper: Typical.

Piper: Fine. Go.
Leo: Oh, not the "crying" thing.
Piper: Leo, I have growing powers inside of me, powers that I do not understand. And the only person who does understand them never has time to talk. Add that to raging hormones, and I guarantee you I am absolutely entitled to do the crying thing.

(Leo tries to write a spell to summon the Siren)
Leo: Oh singing lady of the dusk, who preys on men, turns love to lust, we hearken ye...
Phoebe: "We hearken ye"? What, are we trying to summon a leprechaun?

Leo: (after their powers/pregnancy switch back) Hey I'm not nauseous anymore.
Piper: Hey I am! Wait that's not good news.

Cole: So, uh, did you get my flowers?
Phoebe: Yep. (quoting the card) "Sorry I tried to strangle you"? Probably not a card that the florist gets to write everyday huh?