When Prue casts a spell to catch a demon who kills only men, she turns into a guy who is rendered powerless when the demon's fatal charms zero in on her/him.

with darkness to protect herself
from heartbreak, she becomes a
succubus, a sexual predator.
"She seeks out
powerful men who become helpless
against her magic, then feeds on
their testosterone with her razor-sharp
tongue."
To attract and destroy the succubus

To Attract and Destroy the Succubus

Prue Halliwell cast this spell after Phoebe was afraid that she was a Succubus. The spell resulted in turning Prue into a man and when the succubus was destroyed, Prue turned back into a female.

This spell requires fourteen black candles. Draw a large symbol of Mars, representing the male gender (♂) on the floor and space the candles around it. The one who wishes to find the succubus should chant the spell within the circle.

By the forces of Heaven and Hell

Draw to us this woman fell

Rend from her foul desire
That she may perish

as a moth to fire. 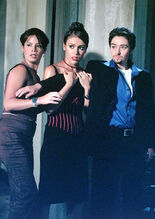 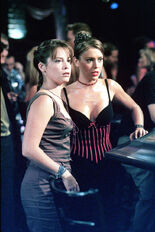 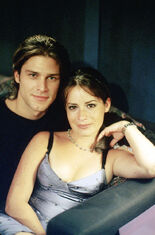 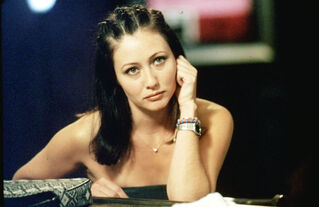 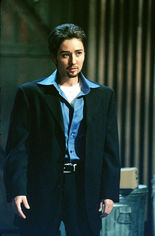 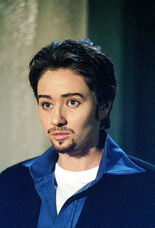 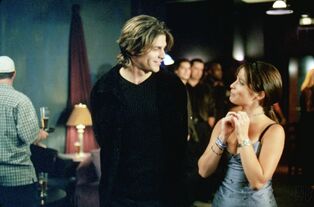 Darla: Congratulations, Prue. Your days of having trouble with men are over. See you at tonight's mixer?
Prue: Okay, you know, for your information, I do not have man troubles. Financial ones, now, yes. But definitely not man troubles.
(Phoebe comes in.)
Phoebe: We're out of here.
Prue: She... you.
Phoebe: Okay.. it's okay... it's all right.
Prue: I don't. Honestly. (to Phoebe) Tell her.

Phoebe: Okay. Let's work on your walk.
Piper: All you have to do is visualize a man that you admire and then you emulate him. You know, the walk will follow.
Prue: A man that I admire... all right... I got that.
Piper: Okay.
(She walks and then does a girlie turn at the end.)
Piper: The man you admire is Richard Simmons?
(Piper and Phoebe laugh.)

(Piper is watching Dan's tape.)
Dan: I'm sorry.. I.. I.. I just... I can't do this.
Jan: Oh, come on. Your sister paid for this, Mr. Gordon. You can do it.
Dan: Oh.. this just isn't me.
Jan: Give it a try. Just speak from your heart. What are you looking for in a woman?
Dan: What do I look for? I don't know. I'm an old-fashioned, I guess. I look for the girl-next-door. Someone with a good heart, good personality, and looks to match. The kind of girl that... when I leave for work in the morning... I wait just... a little bit... till she leaves for work too. Just to catch a glimpse of that long dark hair, that great smile, hoping that maybe, one day... she'll notice that I'm watching her. Then she'll smile back at me.
(Piper just smiles.)

Phoebe: Um... did Manny just check out that girl's butt?
Piper: Oh god. This is startin' to get weird.
Phoebe: It's starting to get weird? Where you been?

(referring to Piper after she shares her views on what the ideal man should be like)
Prue: She learnt all that just from looking out a window?
(Prue and Phoebe hurry to window)
Phoebe: Oh yeah. Nice body, great tan . . .
Prue: Awesome truck!
Phoebe: You know, I think you really are becoming a man.