4398013
Secrets and Guys is the 14th episode of the first season and the 14th overall episode of Charmed.

A kidnapped boy with special powers sends cryptic cries of help to Prue. The search for the boy leads to the unveiling of a special secret about Leo, Piper's beau. 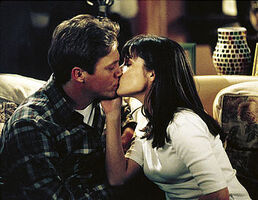 Phoebe: Wait. What's in there?
Piper: Stuffed animals without eyeballs. Dollies that look like they've been through the mill once or twice… and looky here. Miss Phoebe's diaries.
Phoebe: The place where I kept all my secrets. Give me those. (She takes her diaries and she giggles. Prue and Piper give her a look.) What?
Prue: The place where you kept your secrets?
Phoebe: Uh-huh.
Piper: Phoebe, you could never keep a secret.
Phoebe: Oh. That is so not true.
Piper: Ok. Maybe Prue's surprise birthday party.
Prue: Guess again.
Piper: You knew?
Prue: Mm-hmm. (Piper hits Phoebe playfully.)
Piper: Phoebe, you swore you wouldn't tell her.
Phoebe: I'm sorry. Ok? It was an accident. (Piper sighs)

(In the Police Station. Prue is sitting by Andy's desk.)
Andy: Ok. Let me get this straight. You think a guy named Max might be in some kind of trouble, but you have no idea why. You've never met him, and you really have no idea who he is. Is that about right?
Prue: Ok. Fine. See, I had a dream last night and, uh, in my dream my sisters and I were cleaning the attic when we found this old ouija-type board and the pointer started to move until it spelled out "Help Max." (A couple of seconds pass.) That's it.
(Andy types MAX on the computer and presses ENTER.)
Andy: You know, I hear a lot of stories in my line of work, but yours are always very entertaining.
Prue: Thank you.

(In the Manor. Phoebe is walking down the stairs with the phone in her hand.)
Phoebe: Yeah. He sounds like a real piece of work. He has a nice voice though. What's he look like?
(Cut to Quake. Piper is sitting by the bar.)
Piper: A complete and total jerk. Is Leo around?
(Cut to the Halliwell Manor.)
Phoebe: Yeah. He's working away.
(Cut to Quake. There is a commotion by the kitchen.)
Phoebe: He wants to know when you're gonna get back though.
Piper: Uh, I think it might be a while. Maybe I should talk to Leo.
(Cut to the Halliwell Manor.)
Phoebe: Sure. Hold on a second. (She walks into the living room and sees Leo floating by the chandelier with a light bulb glowing in his hands) Oh my god!

Retrieved from "https://charmed.fandom.com/wiki/Secrets_and_Guys?oldid=437870"
Community content is available under CC-BY-SA unless otherwise noted.