Sam: "They made me a Whitelighter again. And I screwed up again. I guess I never got over..."
Piper: "Losing your daughter? Yeah, that's the one."
— Sam and Piper talking about Paige

Sam, I Am is the 9th episode of the fifth season and the 97th overall episode of Charmed.

Cole attacks The Charmed Ones as he realizes that he must eventually give in to evil destiny in the hope that the sisters will vanquish him and end his suffering. 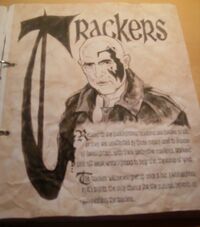 Related to the darklighters, trackers are harder to kill
as they are unaffected by those means used to dispose
of darklighters. With their distinctive markings, trackers
pick off weak whitelighters to help thin the ranks of good.
The tracker will never give up once it has a whitelighter
in its sights. The only chance for the survival depends on
vanquishing the tracker.

Phoebe made a Vanquishing Potion for Ronan. When Cole called him and he Black Orbed in, Piper tried to blow him up, but he was made Immune to it by Cole. Phoebe then said he wouldn't be Immune to the potion, and threw it, but he was Immune to it as well.

While shot by the Tracker, Paige came up with an idea to vanquish Cole: combining three potions. The sisters created three potions, as strong as the one they used on the Source. Before going up against Cole, they tested it on the letter opener with Cole's acidic blood on it, and the potions completely destroyed it. However, Cole still survived after the combination of the three potions.

Retrieved from "https://charmed.fandom.com/wiki/Sam,_I_Am?oldid=436587"
Community content is available under CC-BY-SA unless otherwise noted.