The ability to alter reality as desired

Spell or through concentration

Active Power
Reality Warping is a rare and extremely powerful ability, which is defined as the ability to change or manipulate reality and the world, itself to various degrees.

For a reality warper, nearly all things are possible and almost anything they want can be done. This ability may be used and manifested in many different ways, from changing physical aspects, the users surroundings, augmenting powers to distorting the very fabric of space and flow of time itself.

Any power that truly stems from Reality Warping is considered to be extremely rare and those in possession of it are almost always portrayed in positions of great power.

Reality warping is a powerful ability and there are many other powers which stem from it and in time may evolve into it. 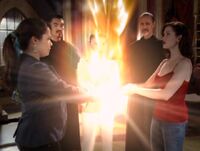 Spells from a collective of Upper-Level witches, such as the Charmed Ones, are capable of warping reality. With this, they are able to cast and create spells to warp reality with little effort and get what they desired successfully. This was shown when the Charmed Ones helped the Avatars to create Utopia via their magic. 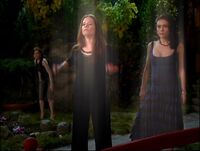 Projection is a form of reality warping where the user changes the world around them through desire and imagination. Billie Jenkins and Wyatt are the only known users of this ability who can use it with free will other than beings such as Genies who can only warp reality through their masters wishes.

Conjuring is the ability to materialize an inanimate object or being into reality from nothing.Though common among various beings and not nearly as powerful, conjuring could be considered a form of reality warping due to users bringing items into existence. 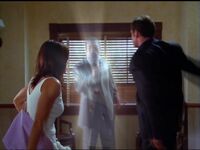 Thought Projection is the rare power to bring your thoughts, fictional and inanimate objects and beings, to life. It allows the possessor to manipulate reality similar to Projection, but on a smaller scale. However, this power is limited to bringing objects and images to life and cannot alter reality on a larger scale. Kevin, a witch who later became on Elder, possessed the ability to project his drawings into reality.