Prue: "I don't buy it. Her power can't kill."
Leo: "Well, it can now. It's been ten years. All your powers have grown."
— Leo explaining that Phoebe's power can now kill.[src]

To use this power, the user must first channel the emotions of another being; the emotions could be from an enemy, a victim, or a mixture of both. Once the emotions are channeled, the user can then project the emotions through their hands and into their target in the form of crackling blue electricity.

Using these bolts of energy, the user can flood their victims' mind with emotions and/or memories, forcing them to relive related memories, and finally, overloading their brain. These bolts can severely incapacitate — if not vanquish — even magical beings thought impossible to be vanquished. 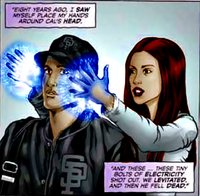 "I used his own rage to kill him. Flooded his mind with his reflected emotions. Overloaded his brain with the memories of the women he hurt. What he was feeling when he attacked them. The fear they felt."
—Phoebe discovers her power.[src]

When Phoebe time traveled from 1999 to 2009, she received a premonition in which she saw herself killing Cal Greene with this power after he murdered her friend. At the time, she did not know what the power was or how she killed him. However, in early 2008, Phoebe realized how she developed this power: it was born from her rage after finding her friend, Elise Rothman, severely beaten by Cal Greene. In this timeline, Paige was present to heal Elise and saved her life as opposed to Elise dying. Phoebe realized she had used her power and amplified Cal's emotions which forced him to feel what his victims felt when they were attacked. She had placed the images of his former victims in his mind accompanied by their fear. Phoebe chose not to kill Cal in the current timeline, as she knew it would lead to her being burned at the stake and begin a witch hunt.

"Hold on, Phoebe. Use them against her."
—Piper to Phoebe.[src]

In 2008, Phoebe used this power to channel all of Neena's emotions, brought them to the surface and forced her to experience all her deepest feelings at once. This caused Neena extreme mental pain until she was knocked unconscious. The emotions also proved too much for Phoebe to handle and she collapsed, but still remained conscious. She later decided she would only use this power when it was absolutely necessary.

Phoebe doesn't use this power for a while until the fight against Emily Fisk-Navarro, a Witch Hunter, and her demon partner, Izax. Phoebe tapped into Emily's emotions, touched her fear and then turned it around to project it back into Emily's mind. Phoebe was careful to filter the strength of the images that flooded Emily's mind, as she didn't want to kill her, just teach her a lesson, that if she did not stop hunting witches the only person she was going to hurt was herself.[1]

"Just take these images to see what we have done. We didn't hurt you."
—Phoebe to Medusa.[src]

The next time Phoebe used this power, she used it to project images from her own mind into another person's: Believing that Paige was just as evil as Athena, Medusa attempted to kill her, though Phoebe prevented this by filling Medusa's mind with images of some of Paige's most heroic deeds, as well as some of the Charmed Ones' greatest battles, and all the innocents they'd protected—both during their time with Paige, and the early days with Prue. Phoebe also showed her images of all four sisters working together to fight evil.[2]

When Prue attempted to stab Phoebe with the Ancient Athame, she was forced to use this power - making Prue relive several memories, causing her to fall to her knees in pain while clutching her head. After breaking free of her power, Prue accused Phoebe of trying to kill her. However, Phoebe explained that she knew Prue could handle the mental assault, and her true intentions were to help Prue remember who she was.[3]

A couple of days later, Phoebe used this power again to help a possessed Prue to fight off Heremus's control. This time, she combined the power with a spell connected via their Power of Three connection to show Prue memories of the three of them growing up together.

"Phoebe is still using her empathy to help Paige with her memories."
—Piper talking to Prue.[src]

Throughout the following months, Phoebe used psychic reflection in new and creative ways—she and Amelia Desmots combined their empathic and medium powers to help an amnesiac Paige recover her lost memory. Though the process is slow, they are confident she will eventually be back to her old self.

The purpose of this power is to inflict pain or cause the instant death of an enemy, however, channeling too many emotions to do so can sometimes have an effect on the user; for example, channeling all of Neena's emotions at once caused Phoebe Halliwell to collapse but still remain conscious. Phoebe has since learned how to filter the strength of her power and can simply use it to project emotions and images without harming individuals.

Phoebe can currently only attack one opponent at a time, and needs to be near her opponent, as using her power involves holding her hands with her palms spread at each temple of her enemy's head, usually while standing behind them. However, she offsets this limitation by sneaking up on her opponents.

When both emotions and memories are missing in a being, this power will be rendered useless. Phoebe first revealed this while in The Nexus of the All fighting Rennek's soldiers. She flew up behind one of the soldiers and tried to use her power on him, but found he had no memories or emotions to turn back on him. At the time, she was unaware the soldiers were made out of sand, plants, and water.

A witch who is either blessed or cursed with the power of empathy was shown to be capable of using her natural power of astral-projection to project emotions into another being - Prue was the only known person to have ever used empathy and astral-projection in this manner.

During her fight with the demon Vinceres (who was originally believed to be unstoppable), Prue concluded the battle by astral-projecting herself into his body and forcing him to feel all the emotions that she had been experiencing. As demons could not handle human emotions, the emotional baggage overwhelmed Vinceres and literally tore him apart; vanquishing him.

It was presumed that Phoebe used a more advanced version of this ability on Prue to override Heremus' influence, and reflect her own memories unto Prue. However, the last time she and her sisters projected into Prue's mind, they needed physical contact with her, so it was possibly an advancement of Phoebe's range.

"What did I do, premonition the man to death?"
—Phoebe Halliwell on her new power.[src]

This power was originally believed to be an ability which fans named Electro-Mental Ignition. Fans believed that Phoebe overloaded a victim's brain with visions of the worst moments in their life. This theory was based on Phoebe's own reasoning about her power advancement, as well as the fact that her sisters' power advancements were also directly related to their primary power.[4]

Retrieved from "https://charmed.fandom.com/wiki/Psychic_Reflection?oldid=425658"
Community content is available under CC-BY-SA unless otherwise noted.