4399035
Pardon My Past is 14th episode of the second season and the 36th overall episode of Charmed.

Phoebe risks her life by travelling back in time in order to reverse the past in which she was seduced by an immortal warlock to give in to the dark side of her power.

After Anton was vanquished, Phoebe wrote an entry about him to warn the future generations.

Remove the chains of time and space
And make my spirit soar.
Let these mortal arms embrace
The life that haunts before.

To Kill An Evil Witch

To Switch Bodies With a Past Life

In this time and in this place
Take this spirit I displace
Bring it forth, while I go back
To inhabit a soul so black.

To Return to Present Life

In this time and in this place
Take this spirit I displace
Bring me forth, while she goes back
To a soul so black. 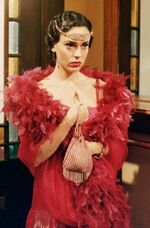 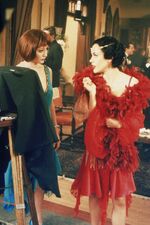 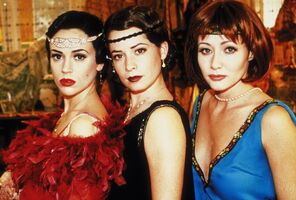 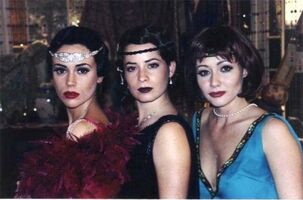 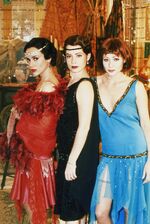 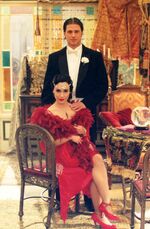 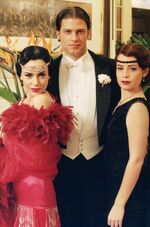 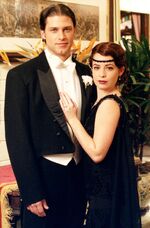 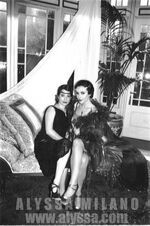 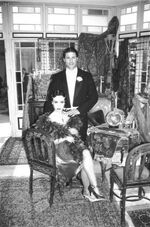 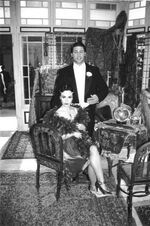 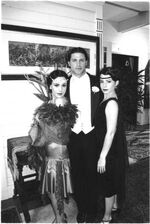 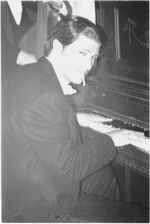 Prue: Great party. Maybe we should do this more often.
(Piper's attention is directed towards Dan and Leo, who are drinking beer and talking in the living room.)
Piper: Yeah. Maybe next time, we can trim the guest list by one.
Prue: Piper. I had to invite Leo. He was at the club when I went to go pick up the supplies. He knew that we were throwing a party.
Piper: Well didn't you think maybe he'd feel a little awkward being here because of Dan?
Prue: It doesn't look like he feels too awkward to me. Look, Piper, he's been mortal for what? A couple of weeks now? I mean, I felt bad for him. He doesn't know anybody and it's not like there's a fallen-Whitelighters-support group to join or anything.
Piper: Prue, I'm not upset with you. I'm just…I'm…I'm upset with the whole situation.
Prue: Well, Leo's just going to have to accept the fact that you're with Dan now. You are still with Dan, right?
Piper: Yes. Of course. (We see Leo and Dan laughing.)
Piper: What do you think they're talking about?
Prue: You.
Piper: Great.

Phoebe: I have too many phobias. To study for my psych exam. I never knew there were so many. Claustrophobia, arachnophobia..
(she flips through her flash cards)
Phoebe: Kleptophobia, phallusphobia.
Prue: Relaxaphobia.
Phoebe: Cute.
Prue: Just trying to help.

Piper: What the hell are they talking about?
(Cut to Leo and Dan.)
Leo: My favorite ball player? Joe DiMaggio. Hands down.
Dan: DiMaggio. No. I meant when you were growing up.
Leo: DiMaggio was…my grandfather's favorite. That's why he's mine too.
Dan: You know Leo, this is just an observation, but uh, you don't like to talk about your past that much. Do you?
Leo: It's just not all that interesting, really.
Dan: Not that interesting? I mean, being in the army sounds pretty interesting. How, I mean, how long have you been out?
(Piper enters.)
Leo: Piper.
Piper: Hi guys. Having fun? Not talking about me too much, I hope.
Dan: No. No. Not at all.
Piper: No?
Dan: Actually. Leo was about to fill me in on his army experience.
Piper: The army? (Leo smiles) Huh. Whoops. Look at the time. Gotta call it a night. Party's over.

(Phoebe enters looking for the family tree. Piper, Prue, and Leo follow her.)
Phoebe: Family tree. I know I saw one somewhere.
Piper: Uh, I still don't understand.
Phoebe: We were all related. Cousins. And we lived here at the manor back in the twenties. (She begins looking for the family tree)
Piper: Together? Here? (She looks at Prue) So much for evolution.
Prue: Wait. So you saw us in our past lives? I mean, did we look the same? (Phoebe looks up from the trunk)
Phoebe: Uh, yeah. You did, actually. Kind of. (She opens the trunk, kneels down, and begins to look through it)