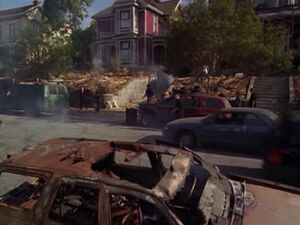 A Parallel World is a world that serves as a parallel or counterpart to the 'other world' created by the Grand Design to maintain balance of the universe. In "It's a Bad, Bad, Bad, Bad World, Part 1", it is revealed that there is a parallel world where moralities are reversed. It exists to maintain the cosmic balance.

In the world where moralities are reversed, the Charmed Ones are powerful evil witches and the terrors of San Francisco, feared by all. The Book of Shadows is also an evil counterpart. Prescott Street has been reduced to a slum while only the manor remains intact and unchanged.

Leo Wyatt and Sam Wilder are Darklighters instead of Whitelighters, resulting in Paige, Wyatt and Chris being born as Half-Darklighters. Additionally, in this world, Chris came back from the future to save Wyatt from turning good instead of evil.

Gideon is a dark Elder in this world, though it is unknown whether there still is a council of Elders.

The San Francisco Police Department is corrupt and a rogue Darryl is shown hanging out in P3, which is a strip club where Inspector Sheridan moonlights as a pole dancer.

The Underworld in this world is a peaceful paradise, since demons are good. This was proven by Barbas, who presents himself as the Demon of Hope rather than the Demon of Fear.

As part of his plan to kill Wyatt Halliwell for the greater good, Gideon worked with his evil counterpart by communicating through a mirror between the worlds. When the Charmed Ones planned on sending Chris back to the future, Gideon intervened and instead exchanged the good Leo and Chris with the evil ones as a distraction.

Phoebe and Paige quickly trapped the evil versions after they escaped into the city and then traveled to the parallel world to retrieve the good versions. The evil Gideon then sent them to the Underworld, where Leo and Chris had found a good version of Barbas. The evil versions of the sisters then appeared, resulting in a battle between counterparts. However, they ultimately stopped fighting when they realized they had common goals. Barbas then revealed to them that Gideon was behind it all.

When the sisters returned to their world, they found that the balance had been upset, resulting in their world becoming too good and the parallel world becoming too evil. When Gideon kidnapped Wyatt, both sets of sisters found the mirror between worlds and decided to work together. By using a spell invoking the Power of Four, they were able to prevent Gideon from killing Wyatt. However, Gideon then asked for Barbas's help, who manipulated Piper into casting a spell to distract the sisters.

Gideon then fatally stabbed Chris and took Wyatt to the Underworld. Leo eventually tracked him down and worked with his evil counterpart through the mirror. However, to correct the disturbance in the worlds, good Leo then vanquished Gideon on his own as a great act of evil was needed to restore the balance. Leo then destroyed the mirror, breaking all contact.

When the balance was disturbed, the good world became a very bright world with eternal sunshine. However, morality was so disturbed that even mild swearing was considered a capital offense. Phoebe was shot point blank for parking in the wrong spot and talking on a cell phone loudly resulted in a man getting his hand removed. Meanwhile, the evil world was covered in eternal night and even minor good deeds, such as saying 'bonjour', were punished with limbs being cut off.

The balance was only restored when good Leo killed Gideon in front of the mirror linking the two worlds, as a great act of evil was needed in the good world to restore the balance.

The only way known to communicate with the Parallel World is this mirror. This mirror shows you the other world. It has a chessboard under the mirror. Powers can cross this mirror as well as the chess pieces. This mirror is in Gideon's office in the Magic School. Good Gideon and Evil Gideon used it to plan Wyatt's death. Good Paige and Good Phoebe used to it talk with Evil Paige and Evil Phoebe about how to restore balance in the world. Good Leo and Evil Leo used it to find out where Gideon was. Then both Leos destroyed it.

Retrieved from "https://charmed.fandom.com/wiki/Parallel_World?oldid=428785"
Community content is available under CC-BY-SA unless otherwise noted.