Prue must face her greatest fear in order to destroy a watery demon when the sisters revisit the place where their mother mysteriously drowned. In the process they meet a mysterious stranger from their mother's past. 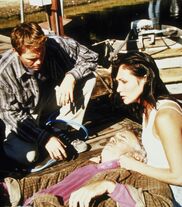 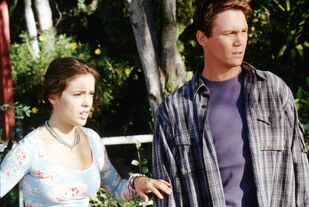 (Piper's on the phone talking to Dan. She runs down the stairs into the kitchen. Phoebe's there reading the paper. Piper sits down at the table and pours cereal into a bowl.)
Piper: Pouring.
(Cut to Dan. He's eating Froot Loops.)
Dan: Uh, chewing.
(Cut back to Piper.)
Piper: I can't believe you eat that stuff.
Phoebe: You guys are killing me with cuteness over here.
Piper: (to Phoebe) Don't you have somewhere to be, somewhere very far away. (Phoebe moves closer.)
Dan: What do you say tomorrow, when Jenny's at school, we have breakfast for real?
Piper: I'll take what I can get.
Phoebe: Nausea. (Prue walks in.) Prue, what are you doing home? You told Piper that you were heading into the office.
Prue: Yeah, things changed.
Piper: Uh, Dan, I have to call you back, okay.
Dan: Okay. (She hangs up.)

(Piper finds a certificate.)
Piper: "New York teacher of the year, Sam Wilder." In 1872?
Phoebe: Okay, so this guy is either 127 years old or…
Piper: A demon.
Prue: Named Sam? A demon named Sam? I mean, can't it be his grandfather's certificate? After all, he did save me. (Piper opens a drawer and finds some letters.)
Piper: What are these? I found... (Leo orbs in and scares Piper.) Whoa! Leo, hi, what are you doing here?
Leo: Come on, we gotta get outta here. Sam could be back at any minute.
Prue: Wait, you know Sam?
Leo: Come on, we gotta…
Prue: We are not going anywhere until you tell us what you know. Who is Sam?
Leo: Sam was your mum's Whitelighter.

(The doorbell rings. Piper answers the door. Dan's standing there holding a tray with bowls of cereal on it. Piper looks confused.)
Dan: You don't look hungry, you look confused, and you're contagious.
Piper: Dan, what are you…?
Dan: Breakfast. Me, you, here, remember?
Piper: Uh, everything's a little hazy this morning.
Dan: Well, is there anything I can do?
(Leo orbs in behind the door.)
Piper: You can hold that thought. (She freezes him and closes the door.)
Leo: What are you doing here?
Piper: What are you doing here? I live here. What, are you checking up on me and Dan? I thought we talked about this.
Leo: It has nothing to do with him. Why aren't you up at the lake?

Retrieved from "https://charmed.fandom.com/wiki/P3_H2O?oldid=436565"
Community content is available under CC-BY-SA unless otherwise noted.