4301109
Necromancing the Stone is the 21st episode of the fifth season and the 109th overall episode of Charmed.

Halliwell matriarchs who have been summoned to bless Piper's baby fall prey to the Necromancer demon who has returned from the Spirit Realm to absorb their magical powers.

Although the entry itself is never seen, Piper said she found one in the Book of Shadows. It included a Spell to summon the leader of the Creepers. Paige cast this spell to summon the Creeper to attic in the manor. The Creeper appeared behind them and Piper vanquished him using the Vanquishing Potion.

Demons who dwell
in slivers of night
Uncloak his shadows
to Witch's sight.

Place five candles in a loose circle on the
floor, light the candles and then Chant:
Hear these words
hear my cry
Spirit from the
other side
Come to me I
summon thee
Cross now the Great Divide.

For those who want the
truth revealed,
Opened hearts and secrets
unsealed,
From now until it's
now again,
After which the memory
ends.
Those who now are
in this house,
Will hear the truth
from other's mouths.

The Necromancer is not a demon
but the ghost of a demon who was
vanquished. Mostly dwelling in the
spirit realm he has dominion over
the dead, although he has been
known to escape to the land of the
living. He no longer possesses
powers of his own but feeding on
the souls of the magical dead
imbues him with temporary life. The
length of his empowerment depends
on the strength of the Spirit.

Grams' Notes:
favorite dinner: lamb chops with mint jelly
Enjoys Clark Gable pictures
Enjoys Luxuries of LIFE!
Willing to do anything to live!!
A user and a liar

To Vanquish a Ghost and Return Him to His Rest

to fight the evil spirit on the astral
plane it is necessary to join him
in death.

grind to a fine powder and
take with the juice of
cranberries...

after battle is joined,
chant the following

"ashes to ashes
spirit to spirit
take his soul,
banish this evil."

continue chanting without ceasing
until the evil spirit disintegrates.

this spell must only be
attempted with a partner.

after not more than four minutes
the dead one must be awakened,
lest she too becomes
a spirit in fact.

To Call the Halliwell Matriarchs

I call forth from space and time
Matriarchs of the Halliwell Line
Mothers, Daughters, Sisters, Friends
Our family spirit without end.
To gather now, in this sacred place
and help us bring this child to grace.

I call forth from space and time
Matriarchs from the Halliwell line
For those who want the truth revealed
Opened hearts and secrets unsealed
From now until it's now again
After which the memory ends.

The Creeper is vanquished.

The Necromancer is banished back to the Spirit Realm. 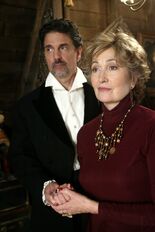 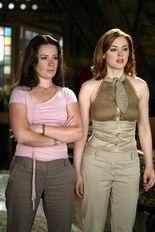 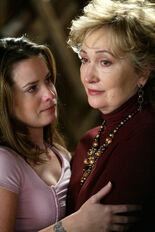 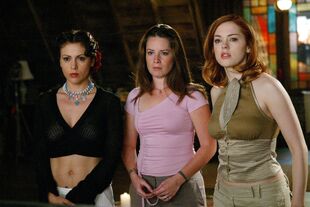 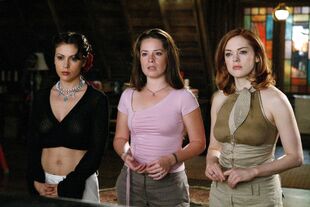 Paige: (after Nate said he has a wife) Excuse me?
Nate: Did I say wife?
Paige: You're married? You never told me you were married!

Grams: Oh I'm sorry, I'm just too excited. How are you my dear?
(she hugs Piper)
Piper: Excited too.

Piper: Okay and now she's dead!
Paige: You sound so happy about that.

Retrieved from "https://charmed.fandom.com/wiki/Necromancing_the_Stone?oldid=425753"
Community content is available under CC-BY-SA unless otherwise noted.