4399030
Ms. Hellfire is the 9th episode of the second season and the 31st overall episode of Charmed.

Prue assumes the identity of a mysterious assassin, while Piper and Phoebe race against time to protect the next intended victim.

Light the top of sage stick and let the smoke fill the room while chanting:

Favour us, Sister Moon with your protective beams.
Give all who dwell within this spell,
safe days and sweet dreams
for those who dwell underneath this roof. 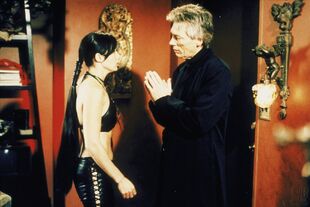 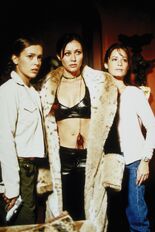 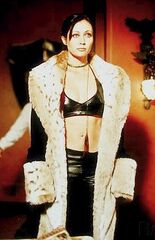 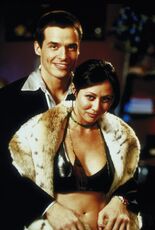 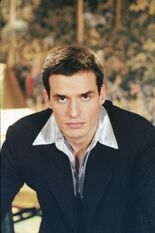 Phoebe: Hi. Do you recognize that person?
Prue: I don't know, she looks vaguely familiar. Kind of like a sister we used to have. What was her name? Pi…P…
Phoebe: Pi…Pippie?
Prue: Pipper?
Phoebe: Whatever happened to her?
Prue: I don't know. She fell in lust with the next door neighbor, started spending all her time there.
Piper: That's because she could, for the first time in months, her life was nice and calm and normal. I don't even care that it's Friday…
Phoebe: Shh! Don't even say it.
Piper: The 13th. See, I said it and nothing happened.
(Suddenly someone starts shooting through the windows of the house. They scream and run past the dining room, into the living room. Prue and Phoebe dive behind the couch and Piper stays on the other side of the room.)
Phoebe: I told you not to say it!
Piper: Oh, so this is my fault?

Darryl: ...and that's why you're standing here alive and she's in here riddled with bullets.
Prue: It was self defense. You can check her gun if you don't believe us. The only finger prints you're gonna find on it are hers.
Darryl: Begs the same question. How come she's got the bullets in her body if you didn't fire the gun?
Phoebe: Do you really wanna know, Darryl?
Darryl: Tell me.
Phoebe: We're witches. We have powers.
Piper: And we think that there's a... how do I put this? A demon behind this.
Prue: The only way for us to find out who it is, is if you can keep all of this quiet for as long as possible.
Darryl: Let me see the book. (Piper hands him the planner.)

Prue: Any idea why she was on the list?
Phoebe: Could be because she's a witch. I mean, not a magical witch but a witch practitioner, none the less.
Piper: A hyperactive witch practitioner.
Prue: I wonder if all the names were witches? How many were on the list?
Piper: Eleven. Except 'P. Halliwell' was only down once, so if you count us individually, thirteen.
Prue: Thirteen dead witches by midnight on Friday the thirteenth. Ring any bells?
Piper: Barbas.
Prue: Gotta be.
Phoebe: It can't be. I mean, we eighty-sixed him already.
Prue: He must have found some kind of loophole. I gotta get back to Bane, try and flush Barbas out.

Prue: Why would a mortal want to kill us?
Phoebe: You were a little sharp to the mailman yesterday, we all know how testy they can be.

Prue: (turning a lipstick to reveal a blade instead) Not exactly Avon calling is it?

Barbas: If she's not back in one minute, then I'm gonna spend the next two minutes killing you/

Retrieved from "https://charmed.fandom.com/wiki/Ms._Hellfire_(episode)?oldid=444187"
Community content is available under CC-BY-SA unless otherwise noted.