4399025
Morality Bites is the 2nd episode of the second season and the 24th overall episode of Charmed.

Phoebe has a horrifying premonition of her own execution, so the sisters cast a one-time spell that catapults them into the future to try to change her fate.

To Move Ahead in Time

Phoebe Halliwell had a premonition from the future of 2009, in which she saw herself getting burned. In order to find out what happened she and her sisters, Prue and Piper, went to February 2009. They did this through the use of this spell. Leo Wyatt, the sisters' Whitelighter, was contacted earlier by his bosses. He had to open the Book of Shadows to the spell without being caught by the sisters and did so. Although Phoebe had written the date on a piece of paper, which was two weeks before she was to be burned, the sisters actually arrived on the exact date of her execution due to the meddling of Leo's bosses.

On a piece of paper, write the date and
year on which you would like to arrive.
Ignite as you recite....

Hear these words, hear the rhyme.
We send to you this burning sign.
Then our future selves we'll find,
In another place and time.

This spell can only be used once.
After which, it disappears....

Prue and Piper planned to use this spell before their sister would be burned to death. They found the Book of Shadows in a wall safe in Prue's office at Buckland's and sought for this spell. Piper mentioned that it was after the demon with the tusk and before the To Discourage a Lover spell. However, the spell wasn't there anymore, suggesting that their future lives had already used it once.

Take us back from whence we came.
To time and place that are the same.
Let past be present, that time regain.

Can only be used once, the spell disappears as soon as the spell is cast.

To Create a Door

Prue and Piper planned to break their sister out of Hobart State Penitentiary. In order to get into the prison unnoticed, they used this spell. Prue remarked that Piper had drawn the door too small, however, they were able to enter the prison.

When you find your path is blocked,
All you have to do is knock.
Requirements: Mark out a door over the area where the door should be created, and then knock two times on the door after the spell is cast.

Prue and Piper were looking for spells that they could use to help their sister. Whilst flipping through the Book of Shadows, Prue noticed that there were many new spells, all marked. This was one of those new spells.

Thoughts, beliefs, ideas, truths, images.
All of these you hold onto tightly.
What I now mention you will release.

Piper wanted to bind the powers of her daughter to protect her from being exposed, even though her daughter made the promise never to use her powers again. In the end, Piper couldn't go through with it and decided not to bind her daughter's powers.

I take your hands in mine,
And with this string I will entwine,
Your powers I'll forever bind,
From now until the end of time.

To Discourage a Lover

Determined to save their sister, Prue and Piper planned to use the Return Spell before she would be burned to death. They found the Book of Shadows in a wall safe in Prue's office at Buckland's and sought for the Return Spell. Piper mentioned that it was after the demon with the tusk and before this spell.

Your love for me shall be no more.
Make your feelings only pure.
Look upon another face.
There's will mine now replace.

A spell which causes the intended target to fall asleep.

A Glamour to Change One's Appearance

It presumably has the same effect as glamouring.

A spell which, like its name says, creates money. It is thought that this spell would fall against the rule of personal gain, but it's possible that it has a condition, such as only to buy important potion ingredients, etc.

To Bend Someone's Will

It allows the caster to bend the target's will. It may have a similar affect to the To Promote Compromise spell. 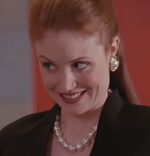 Melinda: Don't worry, mummy. I promise I'll do what you ask. I won't use my magic again ever.

Piper: Prue, what's going on?
Prue: I don't know, but I could really get used to this. Check me out. I don't just work at Buckland's, I own it. And three more. Paris, Tokyo and London.
Piper: And you're blonde.

(A guy holding a cup of coffee bumps into someone and Piper freezes him before it spills. They look around and notice everything is frozen.)
Prue: Okay, apparently my power isn't the only one that's grown. You just froze ...
Piper: Everything. What a difference a decade makes.

Phoebe: Why does everyone think I killed someone? I wouldn't. I mean, I couldn't. What did I do? Premonition the man to death? My power is passive.
Leo: Not in the future. It's grown. It's changed. As have you. Which means unfortunately you have to suffer to consequences.

(Piper gets back in the car. Prue looks upset.)
Piper: What is it? What's wrong?
Prue: I have no one to say goodbye to. My life, they didn't even know who you were at the office, my own sister. If we die tonight, my tombstone will read "Here lies Prue, she worked hard."
Piper: We're not gonna die. We are gonna find a way back to the present and we'll create a new future.

Retrieved from "https://charmed.fandom.com/wiki/Morality_Bites?oldid=429951"
Community content is available under CC-BY-SA unless otherwise noted.