4300046
Magic Hour is the second episode of the third season and the 46th episode of The WB's Charmed.

Piper and Leo defiantly attempt to marry in spite of the wrath from The Powers That Be, as a demon infiltrates the three Charmed Ones.

Handfasting is the eternal joining
of two people in Love.
It is a sacred ceremony of commitment
presided over by a High Priestess.
Best performed at a time
of sunrise or sunset when both
the Sun and the Moon are present
in the joining of the two Lovers. 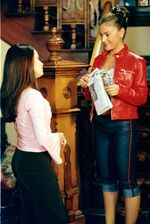 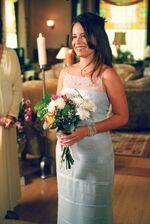 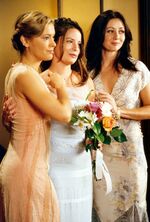 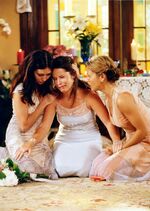 Leo: Look, there is door number three. We can try and pull this off tomorrow night, if we do it's binding. They can't even break that apart.
Piper: Yeah, but if they find out they can break us apart into a thousand little pieces.
Phoebe: Excuse me?
Piper: I believe the term he used was unspeakable wrath, the likes of which you can't even imagine.
Leo: Look, I'm not gonna lie to you, we would be taking a huge risk and until they get an answer they are going to be listening very closely, so any talk of 'it' any use of the W word...
Prue: I hate to be the detail police but how are we gonna hide it from them when we're on their supernatural redial? They're always gonna be tuning in. Phoebe, did you find anything in the Book Of Shadows about how to hide this?
Phoebe: No, nothing. I'm sorry, I'm still on the unspeakable wrath part. I mean, is that just the bride and groom or does it also include bridesmaids?
Prue: Phoebe...

(An owl is in the porch and Kit has her claw up ready to attack it. Phoebe opens the door.)
Piper: Kit, leave that alone!
Phoebe: Bad kitty!
(The owl suddenly turns into a naked man.)
Prue: Oooh, good kitty.

(Cole sees Piper's book "How To Keep Your Marriage".)
Cole: So who's the lucky guy or more importantly, who's the lucky sister?
(The bookstore employee puts the books in two bags.)
Piper: Me... me, me. Mimi, our cousin. (Cole wiggles his fingers and Piper's books swap over with his.) Our cousin Mimi.
Phoebe: Good old cousin Mimi.

Grams: You need guidance, some advice on a certain sister situation. Am I getting warm?
Phoebe: Red hot. But wait a minute, if you know, that means that they know, and if they know then we are f--
Grams: Fine. Anyway, I'm beyond them now. Secrets safe with me. But what about you, Phoebe? Do you want to tell me about that nagging concern you have in your gut?
Phoebe: That's no fair you have after life advantage.
Grams: I also know you, Phoebe. Talk to me.
Phoebe: Okay. (She sits down on a chair.) Um, I wanna be able to support Piper in this. I want to look at her and I wanna say go for it but what if her and Leo get rudabaga-ed and they find out and then something horrible happens to them. I mean, look what happened to mum and her... special friend. And I hate to go skipping down selfish road but what if by association...
Grams: You and Prue get hurt.

Retrieved from "https://charmed.fandom.com/wiki/Magic_Hour?oldid=434545"
Community content is available under CC-BY-SA unless otherwise noted.