Lynn: "Wait! Do you have to leave so soon? Can't I help?"
Bianca: "Yeah. Someday, when I ask you how it feels to kill, don't lie to me. Don't tell me you don't feel a thing."
— Lynn and a future version of Bianca.[src]

Lynn is a member of the Phoenix, an elite family of assassin witches risen from the ashes of Salem. She has a daughter named Bianca.

In a dark future where Wyatt Halliwell was evil, the adult Bianca fell in love with his younger brother Chris and became engaged to him. Together, they sought to prevent the dark future and Chris traveled to the past to save his brother. After being threatened, Bianca was sent back by Wyatt to retrieve Chris.

When the Charmed Ones tried to find Bianca, they instead found Lynn, who escaped with her five-year old daughter. The future Bianca later appeared in her apartment looking for their grimoire, which Lynn handed over. Despite Lynn seemingly loving her daughter, the future version of Bianca acted coldly toward her. When Lynn asked if she could help, Bianca told her not to lie when present Bianca would ask how it felt to kill. 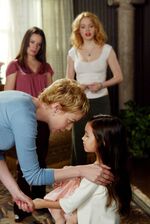 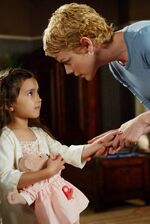 Lynn appeared in a total of 1 episode throughout the course of the series.

Retrieved from "https://charmed.fandom.com/wiki/Lynn?oldid=429629"
Community content is available under CC-BY-SA unless otherwise noted.