Returning to San Francisco, Leo asks the Halliwell sisters to protect an innocent woman who is being stalked by a demonic suiter. Piper finally learns that her beau, Leo, is a Whitelighter. Because of this, Piper must say goodbye to her love.

What's mine is yours,
What's yours is mine,
Let our powers cross the line.
I offer up this gift to share,
Switch our powers through the air. 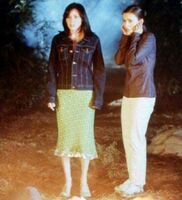 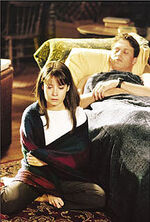 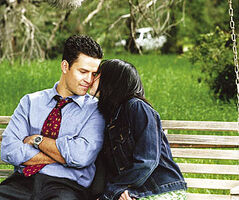 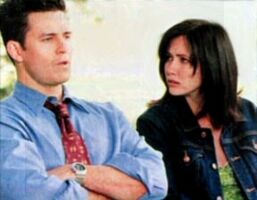 Leo: (to Daisy) Don't worry, Daisy. He can't see you. Don't say a word, just leave quickly.
Alec: Don't listen to him sweetie, don't do it. (She runs off.)
Leo: She's already gone.
Alec: I love her, Leo. Much like you love your little witch. What's her name? Piper?
Leo: Darklighters aren't capable of love, Alec.
Alec: This one is. I love Daisy and you are keeping me from her. It's only a couple of days ago all I had to do was think about her and bang! I'd be there with her. Then suddenly she vanishes from my radar. Cloaked by a Whitelighter. By you.
Leo: Then if you know I cloaked her, then you also know that you won't find her as long as I live.
Alec: Yes, well, I have a solution for that. (He gets out his crossbow and shoots Leo.)

Phoebe: We have to get the arrow out.
Leo: No, don't touch it, it's tipped with poison.
Phoebe: How are we suppose to get it out if we can't touch it? (Prue enters the attic.)
Prue: You came to the right girl. You ready? (Prue uses her powers to push the arrow out.) Okay, I brought everything that I could find, I just didn't know what to use on a ... what is he again?
Piper: A Whitelighter.
Phoebe: Yeah, they're sorta like, you know how Peter Pan has Tinkerbell? They're sorta like that minus the tutu and the wings. He guides witches.

Phoebe: Leo, I brought you some food in case you're ... you do eat right?
Leo: Yes, Phoebe, I eat. How's Piper?
Phoebe: Oh, you know, she's dealing. I mean, it's not everyday that you find out that the guy you're seeing isn't human. Although, in Piper's case.

Prue: This is a good sign. The spell must have worked. That means Phoebe and... (She touches Phoebe and has a premonition.) Oh, I think I just had one of Phoebe's premonition thingies.
Phoebe: Really? What did you see?
Prue: (She points to a lamp.) That shattering. (Kit jumps on the table where the lamp is.)
Phoebe: Kit, no! (Phoebe puts her hand up and she makes the lamp fly against the wall and smash.) Did I just do that?
Prue: Uh huh, and I saw it. So, okay, you're moving things, I'm having premonitions and Piper can't freeze which means...
Piper: Am I gonna get yelled at?
Prue: It switched all of our powers?
Phoebe: It's a supernatural freaky Friday.

Prue: Remember when I said that you had no vision?
Phoebe: Which time?
Prue: Oh, you will never hear it again. Takes a lot of strength to see what you see.

Retrieved from "https://charmed.fandom.com/wiki/Love_Hurts?oldid=443954"
Community content is available under CC-BY-SA unless otherwise noted.