Paige becomes immersed in an ongoing feud between two magical families, the Montanas and the Callaways, and attempts to bring about a truce. 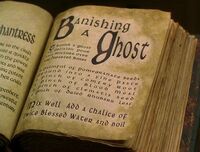 To Banish a ghost
to oblivion pour
this mixture over
the departed's bones:
a palmful of pomegranate seeds
ground into a fine paste
a pinch of comfry root
a pinch of blood meal
a pinch of clematis seed
a pinch of dried rhubarb leaf
Mix well, add a chalice of
Twice Blessed water and boil. 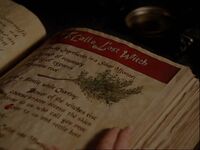 To Find the Place of Injury

This spell was used by Phoebe to take her to Paige. It brought her to the Callaway Family, because Paige was injured there.

Lead me back from whence this came,
Help me help my sister's pain.

To Call for a Spirit

The Halliwell Sisters, Leo, the Callaways and the Montanas combined their magic to call for the spirit who attacked them before.

Unknown spirit, we call to thee,
Those who wish to set you free.
Cross on over, so we may help.
Come to us. Reveal yourself.

To Block the Power of Empathy

Phoebe casts this spell, hoping it would block her empathy to feel her sisters' emotions, but it didn't work.

In the name of the Halliwell line,
Bar my sisters from this power of mine.

To Identify the Source of an Injury

Piper made this potion to see if Paige really was hit by an Energy Ball. The potion got lighter, which means she was hit by a Plasma Ball.

Retrieved from "https://charmed.fandom.com/wiki/Love%27s_a_Witch?oldid=437996"
Community content is available under CC-BY-SA unless otherwise noted.