In a relationship with Benjamin Turner

Cheaper by the Coven

Charisma Carpenter
Kyra, referred to as the Seer in demonic circles, was a demonic seer who turned her back on the Underworld with the intention of one day becoming human. When the Avatars were still perceived as an unknown threat, she offered her information to the Elders in return for being made human.

Kyra was vanquished by Zankou for her betrayal, though she was later transported through time by Prue Halliwell, saving her from her fate.

Conditioned to believe that as a demon she could not have feelings, or at the very least was not supposed to have feelings, Kyra eventually became disenchanted with her demonic life and longed to feel the emotions she saw in her visions. For this reason, she planned to betray the Underworld as soon as she landed the information that would give her the chance to become human.

It was hinted that, at one point, Kyra had some form of relationship with the demon Zankou before he was imprisoned.

When a masked demon attacked Wyatt Halliwell in 2004, his father Leo visited the Seer in the hope of finding out who was after his son. She used her magic pool to give him the answer, which appeared as Leo's own face.[1] He later sought her out again after Penny Halliwell accused him of emotionally creating a replica of himself to kill his own son. The Seer was reluctant to help because of his bad temper, but eventually agreed and gave him a clear revelation to the problem.

Some time later, the half-demon Sirk sought out the Seer in order to track down his last living relatives. The Seer then revealed to him that his cousin's wife, Harriet Casey, was pregnant.[2] When Sirk failed to kill Harriet, he sought assistance from the Seer and she allowed him to see his death to help prevent it, though it still happened minutes later.

While the magical community was worried about the coming storm, Kyra perceived information about the Avatars and the Utopia they wanted to create. She then contacted the Elders and offered to make a deal. However, word of her betrayal spread across the Underworld and she was soon attacked. Leo then saved her and took her to the manor for protection while negotiating with the Elders on her behalf.

During her time at the manor, Kyra bonded with Phoebe Halliwell and helped her and Darryl Morris find Inspector Sheridan, who was held in a coma. As part of the negotiations, Kyra later shared her premonition with Phoebe. After seeing the vision of Utopia, Odin agreed to make Kyra human. Kyra understood that even as a human, she would not possess a soul, though she accepted this.

However, before Kyra could be made human, she was vanquished by the powerful demon Zankou, because he was afraid of what she might tell the sisters, and for her betrayal. Her death had a great impact on The Charmed Ones and led them to agree to meeting the Avatars.[3]

Return to Life and Helping the Charmed Ones

In an attempt to learn what she had become, Prue Halliwell cast a spell to summon Kyra from the past, saving her just before she was vanquished.[4] She gives Prue a vision to help her find out. Afterwards, Prue makes her human as a reward. Though overjoyed at first, Kyra is hesitant about what to do with her freedom.[5] She eventually decided to use it to do good by helping the sisters and the newly resurrected Benjamin Turner readjust to life. As they spend more time together, Kyra finds herself falling for the man, and they soon begin a relationship.

She was kidnapped by Prue, along with Benjamin, Coop Halliwell and Tyler Michaels to bring back the Old Ones, but the plan was eventually foiled and Kyra, with some persuasion from Ben, took ownership of Knox Academy.

All of the following powers below vanished when Kyra became human.

This spell was written by Phoebe to transform Kyra into a human. It was to be used by the sisters, along with the powers of the Elders; it was written in a deleted scene which never aired on television but was seen in a featurette on a behind-the-scenes look at "Witchness Protection".

The Power of Three now acts as One,
To make this Demon come Undone.
We Vanish the powers and evil of She,
Now Bless her with Humanity. 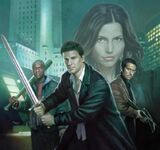 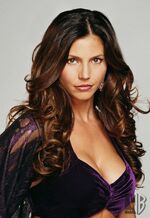 Kyra appeared in a total of 3 episodes and 12 comic issues throughout the series.