Something Wicca This Way Comes

Marita Geraghty (human form)
Kit was a familiar, an animal guide who protects neophyte witches. She once protected Serena Fredrick but became the familiar of the Charmed Ones after Serena was killed by the warlock Jeremy Burns, and the Halliwell sisters discovered their powers. She was their Familiar from 1998 to 2001, after which she was rewarded by being made human, taking the name Katrina.

Becoming the Charmed Ones' Familiar

While Serena Fredrick prepares for her spell, she feeds her cat. The cat runs off when the serial killer enters and kills Serena. When Andy investigates the crime scene, Darryl mentions that the cat has been "clawing the crap" out of all the other officers; however Andy doesn't get scratched. After Phoebe's first premonition, she crashes her bike saving two roller-bladers as the cat watches from afar. When Phoebe and Prue get back to the manor after discovering their powers, Prue jokes about Piper turning into a cat and brings the cat in. The morning after the Charmed Ones vanquished Jeremy, Phoebe carries Kit outside when she hears Prue talking to Andy. Kit meows and Andy recognizes her.

Kit remains at Halliwell Manor, warning the Charmed Ones of impending danger such as the warlock Rex Buckland astral projecting into the house, or alerting them to innocents in magical trouble such as the human turned owl, Christopher.

Sometimes Kit plays an integral role in the battles that the Charmed Ones face such as in 1999 when the sisters are trapped with a painting due to accidentally reading a curse within it. Phoebe attaches the spell to free those trapped within the painting to Kit's collar and sends her into the painting. However, the warlock, Malcolm, trapped within the painting gets to Kit first and reads the spell, freeing him from it. Prue and Piper then get the spell, cast it but almost forget about Kit. Piper and Phoebe reminds Prue to pick up Kit, Prue then notes she can't believe they almost forgot her.

The sisters do not find out who and what Kit really is until the death of sister witch, Ariel. When Ariel's familiar, Shadow, betrays her by killing her and stealing her powers, making himself human, the sisters realize that Kit isn't exactly a house cat.

In 2001, Kit begins watching over the Charmed Ones' long lost half-sister, Paige Matthews shortly before she unites with her sisters. After Prue dies and Paige reconstitutes the Charmed Ones, Kit's duty to the Halliwell sisters is complete and she leaves them with the sisters believing that she simply ran away. Kit is rewarded by being made human, given the duty to care for and guide other familiars, becoming known as Katrina.

Two years later, Katrina is hunted by a Familiar Hunter who wants to kill her so that the other familiars are helpless, leaving neophyte witches unguided. While traveling through the past due to a spell cast by Piper, he continued to try to murder Kit in feline form. Had he been successful, he would have erased much of the good the Charmed Ones had done. Each of his attempts to kill Kit were stopped by Phoebe and Paige who were also under the effect of the spell, and they eventually vanquished him. Katrina then properly reunited with the sisters, revealing who she was and asking them to call her when Piper's newborn baby, Wyatt, comes into his powers. 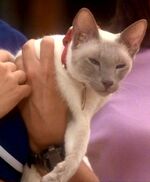 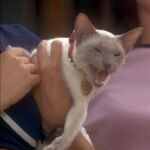 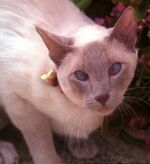 Kit appeared in a total of 14 episodes throughout the series.