"Well, we can take Billie and Christy out before we get infected, or we can do nothing, let them get the Hollow and then all of this really won't matter, because then we'll be dead."
—Piper talking about fighting Billie and Christy.

Kill Billie: Vol. 2 is the 21st episode of the eighth season and the 177th overall episode of Charmed.

In order to defeat Billie and Christy, the Charmed Ones conjure the Hollow, the most powerful force known to man, which leads to a devastating battle.

Ancient beyond measure,
The Hollow is the most powerful and unstable force known
to magic. For an eternity, both good and evil have guarded
the release of The Hollow's un-stoppable, all-consuming hunger
for power.
Summoning Spell:
Ultirusque A Profugus
Addo Is Hic, Addo Is Iam.
Nos Dico Super In Concessus Vox
Bonus Quod Malum.

The entry in the Book.

Christy and Billie casting the Summoning Spell with Wyatt.

The Charmed Ones casting the Summoning Spell.

The Hollow leaving its box.

Christy and Billie absorbing a part of the Hollow.

The Charmed Ones absorbing the other part of the Hollow.

The Halliwell sisters working on the potion.

The Charmed Ones throw their vials.

The Jenkins sisters throw their vials.

The potion bottles hit each other in mid-air.

The Charmed Ones are thrown through the conservatory wall by the blast.

Billie and Christy are thrown through the banisters by the blast.

The Grandfather Clock being destroyed.

The spirit board survived the explosion. 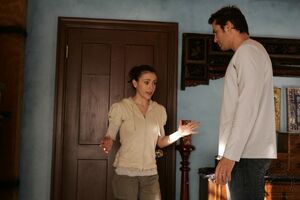 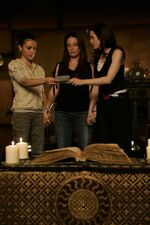 Add a photo to this gallery

Retrieved from "https://charmed.fandom.com/wiki/Kill_Billie:_Vol._2?oldid=425812"
Community content is available under CC-BY-SA unless otherwise noted.