"Perhaps I should suck you into your little mixing bottle and start again. There's always room for improvement. "
—Kierkan to Terra.[src]

Kierkan was a powerful demonic Alchemist. He used metaphysical tools to transform one substance into another. He was creating Life Essences that he uses to possess the living. He can remove an essence from a body on his own and can call it back into his Essence Bearer. Kierkan also possesses the innate ability to bring the dead back to life.

Kierkan: "I made you from my own blood, found you a flawless body and housed you in it. You were supposed to be my... "
Terra: "Masterpiece? I'm not a painting, Kierkan. That blood gave me your powers. You lust for life, yet you hold me captive in this hole and you expect me to be grateful? "
— Kierkan and Terra, moments before she frees herself.[src]

Although unknown when exactly she was made, Terra was Kierkan's own masterpiece. It is presumed that Kierkan had killed an innocent mortal woman, in order to house Terra's spirit in. However, Terra was also made with his blood, which also gave her every power Kierkan had which in the end had disastrous results. Terra eventually frees herself from his lair by stabbing herself into the stomach, and therefore releasing her spirit. However, unknown to Kierkan, her spirit takes up a new home in a passing businessman in order for Terra to find the home of the Halliwell sisters.

"The spirit who possessed you, with whom did she replace you?"
—Kierkan nears closer to finding Terra[src]

Kierkan eventually tracked down the businessman after Terra had killed him and possessed Piper Halliwell, a Charmed One. He brought him back to life with a spell that forced the dead man's soul back into his corpse. Kierkan then interrogated the man until he told him where Terra was now hiding and whom she was possessing. When he got the answer he came for, he said a different spell that removed the man's soul, killing him instantly, again.

While Kierkan was on his way to the manor, Terra planned to vanquish him and set a trap for him by manipulating Prue. Kierkan found Terra inside the manor while Piper was telling her that the spell to vanquish Kierkan required the Power of Three, which meant she couldn't do it alone. Just then, Kierkan barged into the manor and backhands Piper/Terra to the floor. Just as Kierkan is about to stab Piper/Terra, she froze him, telling him that he just pissed off a Charmed One.

Prue and Phoebe entered after him and Piper/Terra provides them with the Power of Three Spell for the vanquish. After the three read a spell, Kierkan begins to be engulfed by flames and says he could have helped them and that she will destroy them. Kierkan then dropped the essence bearer and the sisters watched as he died.

Kierkan
is the most powerful Alchemist known
to exist and he has often used his
expertise to disrupt the natural order
for his own destructive missions.
Even though many Witches are
capable of defeating Alchemist
demons, only the Power of Three
has the might to eliminate Kierkan.
When seeking to Vanquish an Alchemist
Demon use the following Spell:
Let Flesh be Flesh, and Bone be Bone
the Alchemist shall transform none.
Cruel Scientist of Evil Born
with these words face the Fire's Scorn. 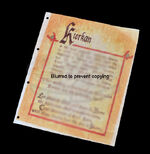 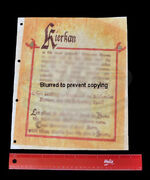 Kierkan appeared in a total of 1 episode over the course of the series.

Retrieved from "https://charmed.fandom.com/wiki/Kierkan?oldid=429378"
Community content is available under CC-BY-SA unless otherwise noted.