Take the Charmed Ones' powers

Something Wicca This Way Comes

"I am not the only one! I am one of millions! In places you can't even imagine! In forms you would never believe! We are hell on this earth!"
—Jeremy's final words before his first vanquish.[src]

Jeremy met Piper Halliwell at the hospital directly after her grandmother was admitted because of her bad heart. Jeremy was covering a story and Piper was bawling over a bagel and he handed her a napkin with his phone number on it.

Over the course of the next six months, their relationship would blossom, even to the point where Jeremy proposed to Piper. Meanwhile, Jeremy continued to brutally murder four witches for their powers, the fourth being Serena Fredrick. While this happened, he continued to cover the story for the paper, presumably to maintain his own cover.

From the moment he met Piper, he knew she was a witch. He suspected that once Grams died, she and her sisters would learn about their powers. But until then, he kept up the pretence of a loving boyfriend. He even bought her flowers and a rare port for an interview with Chef Moore.

That night, after she got the job, he told her he wanted her to see an excellent view of the city from atop an abandoned warehouse. But once they got into the elevator, he mentioned her sister Phoebe being back, which to Piper replied, "I never mentioned Phoebe came home." Jeremy then pulled out the athame he'd used to kill his other victims and attacked her. Piper froze him just long enough to escape back to her home.

Attack at the Manor

There, she and her sisters performed their first spell so that Jeremy's love for Piper would "wither and depart." It caused rose thorns to erupt from all over his body, but he wasn't quite defeated (presumably because he never really loved Piper or because Piper did the spell alone), and attacked them at the manor. Prue held him back with her telekinesis, as they ran to the attic to barricade the door. But using psychokinesis, he was able to move the furniture that was holding it shut and blow up the door. Just as he ignited a circle of fire to kill the Charmed Ones, they chanted "the Power of Three will set us free". Jeremy forewarned that he was one of millions, and that many more will follow him, before exploding.[2]

"Hello, bickering sisters. I'm not pregnant but I am in the room. Phoebe, how did you know I took a pregnancy test?"
—Piper to her sisters.[src]

One month later, Phoebe worried that Piper might be pregnant with Jeremy's warlock spawn when she found a pregnancy test in the trash. When touching the box, she had a premonition about a demonic baby being born. Piper later admitted taking the test, but revealed she was not pregnant. The premonition was later revealed to be about Hecate.[3]

Exactly one year later, the demon Abraxas brought him back to life by reading the spell in the Book of Shadows backwards. Jeremy attacked Piper at a club—that would soon be P3—and knocked out her loan agent. Piper froze him and called her sisters for help. Just as they were trying to remember the spell to vanquish him, Jeremy unfroze, and Piper couldn't freeze him again despite several attempts. The sisters were able to remember the spell, and they vanquished him again.[4]

He returned again in 2010, ten years after being vanquished, this time through the body of Tyler Michaels. However, his return was cut short as the body was taken over by Shax.[5]

Once while explaining Piper's past relationships to the fourth Charmed One Paige, Phoebe corrected her by telling her that Dan Gordon wasn't Piper's evil fiancé, Jeremy was.[6] 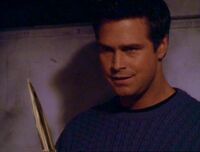 Jeremy Burns was a tall man in his mid 20's. He had thick, brown hair, which was always slicked back. He had very dark eyes, which added to his mystique. He mostly stuck to semi-professional clothing, due to him being a news broadcaster but had a fondness for sweaters and was even vanquished in one. After Piper and her sisters cast the to lose a love forever spell, thorns grew out of his body. During his short return, he still had on the sweater and the thorns were still sticking out of his body.

Jeremy Burns appeared in a total of 2 episodes and 1 comic issue throughout the course of the series.

Retrieved from "https://charmed.fandom.com/wiki/Jeremy_Burns?oldid=437344"
Community content is available under CC-BY-SA unless otherwise noted.