Oh, Henry
The Horned Demon was an unnamed, red-skinned demon with devilish horns on top of its forehead and yellow eyes. He had a muscular human upper body while its lower body resembled that of a hoofed animal. It also had a short tail.

It appears he was either a leader of a demonic faction or had some sort of authoritative power in the demonic hierarchy.

The demon appeared when Neena was plotting to unite all evil in the Underworld by casting a spell that would distribute the recently vanquished the Source of All Evil's powers amongst all demons and other evil beings. The demon questioned why they should follow her, especially considering they did not even know what she was.

The demon later teamed up with the Darklighter Rennek in order to annihilate a vampire clan. He was later vanquished by Piper when he assisted Rennek in a battle against the sisters that killed a pregnant girl. 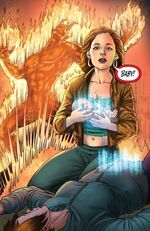 The Horned Demon appeared in a total of 3 comic issues over the course of the series.

Retrieved from "https://charmed.fandom.com/wiki/Horned_Demon?oldid=441169"
Community content is available under CC-BY-SA unless otherwise noted.