Hogan was a lower-level warlock who worked together with Neena, who unbeknownst to him, was the first witch ever to exist. Neena used Hogan to suit her means.

Hogan and Neena wait in a club for Weasel. An Angel of Destiny visits them and tells them whatever their plan is, it is not destined to happen. Neena sends the Angel away to an unknown plane while Hogan projects rage onto people at the club. Weasel meets up with them and hands them a paper. Hogan takes the paper and Neena kills Weasel when he tried to make a move on her.

The paper appears to be a map when Hogan and Neena find the entrance to a cave. They go into the cave and end up in a scary, lava filled lair.

In the second issue, Neena and Hogan are conversing with a smoke-type being, who appears to be in charge of them. It tells them that they must do something before it can return to full power. He and Neena then proceed to kill Paige's latest charge, a witch named Brent, allowing Hogan to absorb his power.

Neena and Hogan travel to the Ancient Burial Ground where the Hollow is located. Hogan then uses his new power of energy sparks to distract the guardians and he and Neena steal some of the sacred soil. Back in the Underworld, a demonic priest uses the soil, along with the blood of the Charmed Ones' innocents that they murdered, to resurrect the Source of All Evil in the form of a golem.

Under pressure from Neena, a reluctant Hogan combines his power of discord with the Source to infect all the mortals in San Francisco and turn them against the Charmed Ones. When the Source heads to the surface to kill the sisters, Hogan and Neena stay behind in the Underworld to complete their own plans.

While the Source is fighting the Charmed Ones at Magic School, Neena is working on a potion. Hogan admits that he doesn't trust the Source, to which Neena replies that he shouldn't have trusted them. He later confronts Neena about the fact that she never killed an innocent herself and questions her about her plans. When the Source is vanquished by the Charmed Ones, Neena casts a spell to take in his powers and share them with the entire underworld. When Hogan asks Neena about his share, she betrays and kills him by trapping him in vines and suffocating him. 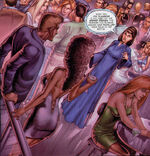 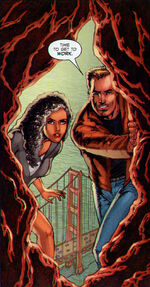 Hogan appeared in a total of 5 comic issues throughout the course of the series.

Retrieved from "https://charmed.fandom.com/wiki/Hogan?oldid=411953"
Community content is available under CC-BY-SA unless otherwise noted.