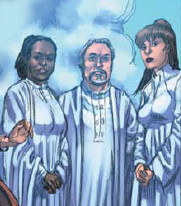 The Grand Design is the intended nature and destiny of the Universe, though whose intent the Grand Design represents is never made entirely clear.[1] Many times on the show, the characters of good or evil tend to change the Grand Design and control or destroy it.[2]

One of the few things good and evil agree on is the need to preserve the Grand Design against anything that could possibly throw it off balance. For instance, the Elders were violently opposed to Piper marrying Leo because they feared allowing a Whitelighter to marry a Charmed One would create too great a concentration of power. When Cole Turner got wind of Piper and Leo's plans to get married under the Elders' noses, he alerted the Triad, who immediately alerted the Elders.

It would appear that most of Phoebe Halliwell's premonitions are based around maintaining the Grand Design, as the Halliwells have always defaulted to act to save any innocents that Phoebe has witnessed in danger in her visions, regardless of the scale of the threat facing them. When Phoebe had a vision of her current love interest, Miles, getting shot, she acted to save him, but it was later revealed that his death was part of the Grand Design and she had received her premonition by accident due to her emotional connection to him. Due to Miles surviving when he was meant to die, his survival created a temporal ripple that allowed a future warlock to steal the Book of Shadows and kill Paige and Phoebe, forcing Piper to use the same ripple to travel back to the previous day and tell her past self to delay Phoebe long enough for Miles to die, undoing all subsequent events.

The Angels of Destiny are said to protect the Grand Design, but had not taken any action when Gideon changed the balance of good and evil in both parallel worlds. An Angel of Destiny once appeared to Neena and Hogan to inform them that their plans are not part of the Grand Design.[3] It is likely that the Grand Design was created by Shakti and Shiva, two Gods who created All Things, according to the Book of Shadows.

Retrieved from "https://charmed.fandom.com/wiki/Grand_Design?oldid=438661"
Community content is available under CC-BY-SA unless otherwise noted.