"Power is good. I like power."
—Paige as the Goddess of War[src]

The Goddess of War is a title originally held by Athena in ancient Greece. She wielded a powerful trident capable of shooting lightning.

Leo Wyatt later told Paige that he had turned her into a Warrior goddess because she constantly sought to become a more powerful witch, without letting the power consume her. Paige gave up her powers after the Titans were vanquished. Although she seemed to enjoy being a goddess at first, by the end she gladly relinquished her powers when Leo called them back.[2] 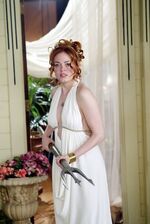 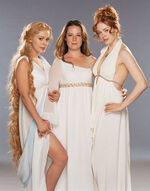 Retrieved from "https://charmed.fandom.com/wiki/Goddess_of_War?oldid=441911"
Community content is available under CC-BY-SA unless otherwise noted.